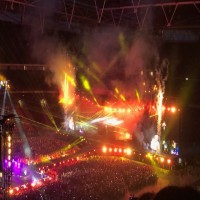 Up to this round, in 2019 I've seen live around 70 metal bands, which is quite a solid number. However, most of us still have some other tendencies and sympathies towards certain music genres. And for me, it was time to dive in and swim away from the heavy metal waters. Way off that course. In this case, not so much because of the sympathies, but more out of curiosity.

This specific event had dragged me far away from my home (well, considering the European continent), and probably the furthest on my whole-year touring journey. To attend this gig, the encouraging part in this decision was actually my girlfriend. Nevertheless, it didn't take me a lot time of thinking to decide and agree with this one. Something new for me. It was time to see what is currently the most popular music act on the planet, South Korean group BTS. Consisting of seven young fellas, BTS are breaking all sorts of (history) records in musical world, from YouTube views and unstoppable increasing popularity all over social media to expediently sold-out shows around the world and selling out every little thing that matters to the band itself. BTS belong to K-pop, a music direction "conceived" in South Korea in the '90s, which has risen rapidly in the last decade or so. Aside from world-famous BTS, there is also a batch of other groups that have gained a fair dose of recognition, not only in their homeland and other Asian lands, but also around the world as well. This "phenomenon" is quite fascinating for many reasons, but there is one in particular that stands out (to me): the language. Their lyrics are 90-95% in their native language. All these achievements, statistics, etc. are even more fascinating with the fact that they were formed in 2013.

The European part of their 2019 World Tour encompassed only four dates; two in London (Wembley Stadium) and two in Paris (Stade de France). Due to certain reasons, for me and my dearly beloved life companion, this was actually an express trip that took us no more than 35 hours altogether, including: 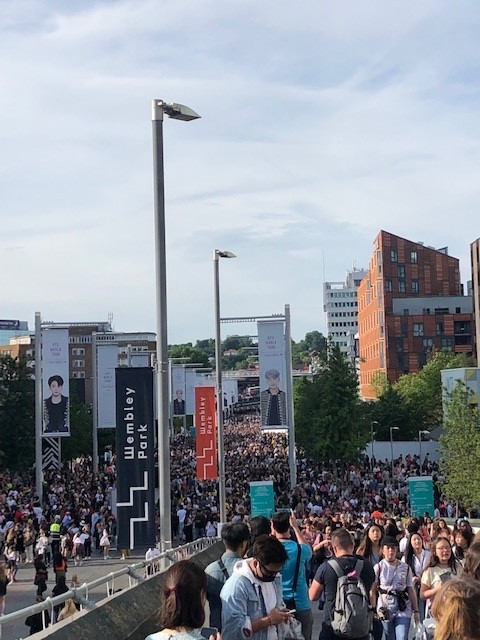 When we arrived at Wembley Park, I was quite shocked, to be honest….a mass of people was gathering. I mean, the show was sold out, with around 70,000 tickets, but there were, like, at least 100,000 people hanging around in the park itself (image above). And I'm not exaggerating at all. It's true that some of them (without a concert ticket) came to get some merchandise, which was selling out in tons. Crowded as hell.

We entered the stadium 1.5 hours prior to the official start of the concert, so we had enough time to settle down, find our seats, and grab a bite and a drink or two. Since the tickets for this concert were sold out in less than one our, we were lucky enough just to get in. This extremely fast-selling gig consequently put us quite high up in the stadium seating area. Still, the view itself was simply spectacular. The opportunities to visit the famous Wembley Stadium are rare, especially if you're coming from afar. 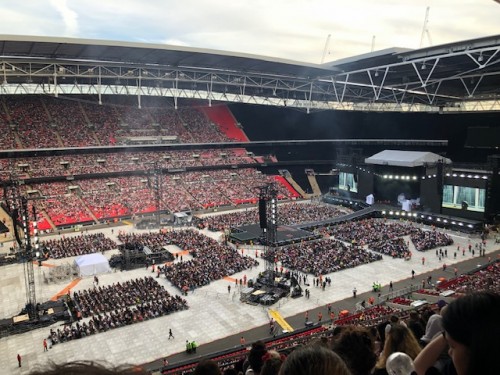 While there weren't any support acts scheduled, the crew and the organizers had prepared a string of rolling video clips of the band on the big screens, lasting till the very beginning of BTS's performance - and what a joy that was. The crowd (mainly representatives of the gentler gender) were hardcore screaming at every video showing, which put my sense of hearing to a serious test. Half-joke, half-reality. I'm not gonna deny it: I had expected this kind of response and ambiance, but still the extremely loud, high-pitched noise was quite obnoxious at times. Well, it's boy band mania, after all

The main event, and the reason we went on this express London trip, began exactly at 19:30 local time. As soon as the background music started, the whole stadium exploded from excitement and expectation, even before the guys appeared on the stage. And when they did…well, it's hard to imagine this absolute breakdown. 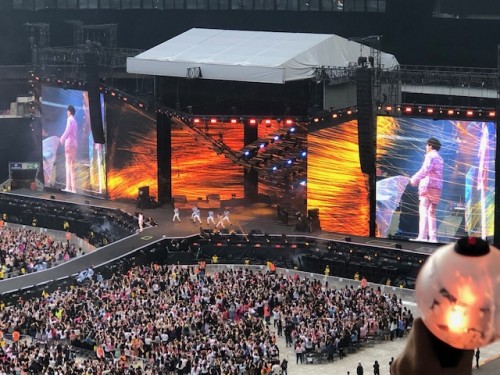 BTS were ready to hit the stage, taking the whole audience on a crazy roller coaster ride. Their show offers many diverse components aside from the singing. Just to clarify briefly: one of the characteristics of K-pop music is also the combination of clean vocals with rapping parts. Alongside a fair amount of different dance choreography and solo/duo performances, there were lots of other things going on. But the best part, or one of the best parts of this concert for me, was the special light show. Everyone in the crowd could buy a special light, installed inside a plastic "head", with a handle for gripping. By the way, one of these costs around 45€. Each individual owner of this light had to connect it and synchronize it with the app via Bluetooth on their smartphones. That way, all of these lights could be operated and controlled by those who were dealing with light show choreography. Most people bought one, which meant that we got a magnificent light show effect over the whole stadium, with more than 60,000 lights in one or more colors being synchronized. It was a lovely addition. 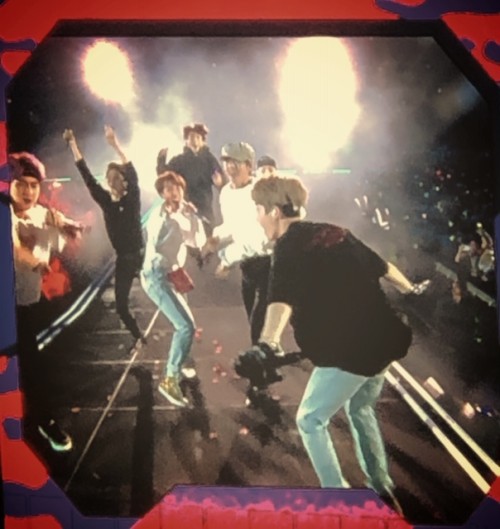 BTS and their music are not something that would "drive me crazy". In fact, it also wasn't my main reason for attending this gig. But I had known that the show itself would be something completely different, special, and massive in many respects. Even though extreme world success came for the guys of BTS with lightning speed, they seemed to be quite down-to-earth and humble, without any inappropriate exposures through media/social life as many other musical acts/musicians at this level are inclined towards. 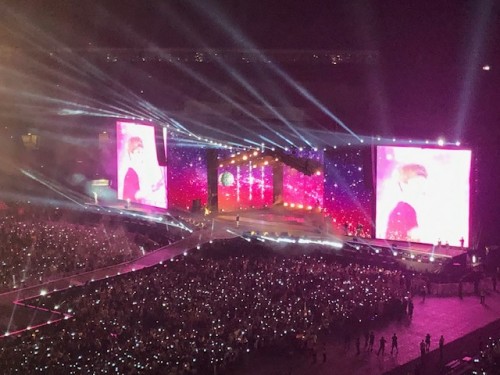 What can I say - it was quite a ride for me and my woman, who definitely enjoyed the whole show even more than I did

. It was exhausting, with barely any sleep for us (around 3 hours in total) during the whole trip. It was a whole new experience for me, however, and I definitely won't deny that it was worth it. 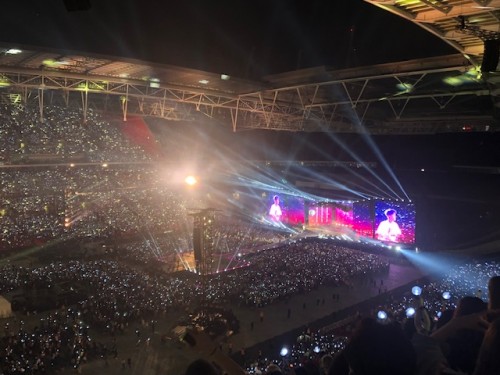