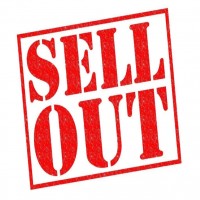 The phrase ‘selling out’ has long been a dirty word in the metal world, as if to break the long held unwritten rule that sticking close to your roots has an intrinsic value that, once lost, reduces an musician’s integrity in such a way as to relegate them to mere salesmen of the musical variety rather than artists. Does Mikael Åkerfeldt have less credibility now that he has traded in his growls for a deeper dive into his love for Moogs and moods? Though this rule is unwritten, I feel that all too often it is applied too arbitrarily and incorrectly, while also being too rigid, so it inadvertently constrains artistic creativity.

The stigma and negativity that surrounds an artist who is deemed to have strayed beyond an invisible boundary into the realms of selling out is one that can damage careers. Therefore, I would argue that there needs to be a greater discussion of what counts/does not count as selling out. Why? The line between artistic growth/creativity and selling out is so ill-defined that the latter is just used to excuse bands you like making a record that isn’t in their traditional mould, but you don’t want to consider they’ve moved on. Not only does it create a schism inside musical fandom that is central to many debates, it can stifle an artist’s creativity in fear that a backlash will erode interest and popularity should they dare take a step out of their musical comfort zone. Is this rigid application of a widely held but uncodified belief a reflection of unrealistic listener expectation or people disliking change?

One interesting point to consider is that if you were to ask someone to define or give an example of selling out, many would likely describe a move towards softer, more refined commercial sound. That this concept views selling out to be a linear, and, at times, arbitrary path is one that I think is malformed. A prime example of this is Testament, one of the leading lights in the 80’s thrash scene with albums such as The Legacy which are hailed as some of the best work to come out of the genre. By following this concept of selling out, then the band’s change of direction to a less abrasive and more radio-ready sound in The Ritual (following in the steps of genre leaders Metallica and Megadeth) meets the definition of selling out.

However, what this definition is blind to is when bands shift to a heavier, but more popular, subgenre of metal. Continuing with Testament, why are the band’s flirtations with death/groove metal in Low and The Gathering not met with the same level of scepticism and derision as the The Ritual in regard to being called sell-outs? When you compare the popularity and appeal of thrash and death/groove metal in the 90s, the band’s move to heavier and darker sounds was as much an appeal to a larger audience than their traditional home as The Ritual was years before.

How can chasing a harder and more extreme sound count as selling out, you may ask? Well, to bring in a more stark example, I would point you to W.A.S.P’s Kill, Fuck, Die, where a band’s glam roots were pushed aside in favour of an industrial direction right at a time when the likes of Ministry, Nine Inch Nails and Fear Factory were at their apex. Were W.A.S.P. not selling out by trying to hitch their wagon to one of the pre-dominant subgenres of the time when glam was all but a pair of brightly coloured spandex in a rubbish bin at the time?

My bigger problem with the concept of selling out, however, is how it indicates a loss of creativity or artistic integrity, when there are so many examples that have shown metal bands to flourish following such a shift in sound. Opeth went nearly 20 years as a growling, blasting metal band before giving up both growls and blasts and being condemned by many fans as a result. Contrast that to their friends in Katatonia; Jonas Renkse’s difficulties with growling came much sooner than Åkerfeldt’s, meaning that barely more than five years after forming, the group moved away from death/doom in favour of a more gothic, melancholic style that has defined the large majority of their career. Similarly, England’s Anathema, renowned for their inclusion in the iconic Peaceville trio of groups that helped pioneer both death/doom and gothic metal, abandoned metal at the turn of the millennium in favour of an atmospheric, progressive style of rock. Both Katatonia and Anathema, who have unsurprisingly been labelled by some as sell-outs, justified their transitions away from extreme metal with various great albums, yet other bands continue to be shamed for less drastic changes in sound.

When discussing the above examples, it’s also interesting to consider how inconsistently criticism is applied for similar acts of ‘selling out’. The backlash Opeth received in the 2010s with a series of releases that were less death-prog and more dad-prog was one of the stronger ones I have witnessed in recent years; contrast this to Katatonia and Anathema, who also transitioned themselves away from their heavy death/doom beginnings, and the backlash and acceptance of each band’s new direction appears highly uneven and arbitrary. Why do we accept that some bands are artists/expressing themselves yet seemingly feel betrayed by others for this same thing?

Is there some verisimilitude that some bands are artists whereas others are not? Am I trying to parse a common thread where none exists? Merely concatenating two parallel trains of thought that crash spectacularly when their paths cross? Much like Harvey Two-Face, I have played devil’s advocate to show that the flipside of the selling-out coin is artistic growth; whereas some people are quick to call which way the coin will fall far too early, it needn’t be the sure-fire bet that some commentators make it out to be.

Written on 19.06.2022 by
omne metallum
Just because I don't care doesn't mean I'm not listening.
More articles by omne metallum ››