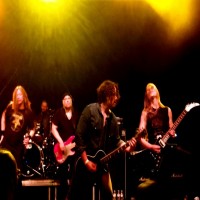 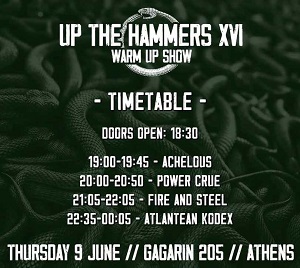 I had been meaning to attend a live performance of Atlantean Kodex since forever, and especially after their latest album, The Course Of Empire, topped my 2019 best-of-the-year list. The opportunity arose in 2020 when they were announced to headline the warm-up day of Up The Hammers Festival in March of that year. For those who don’t know, Up The Hammers is one of the most respected traditional metal festivals in Europe. I thought I was lucky to buy my ticket early enough, because the event was soon sold out, but COVID happened, and Greece went on lockdown either the same day or the day before the beginning of the 3-day festival (cannot remember exactly). It was rescheduled for 2021 but was cancelled again, and then re-rescheduled for 2022 with a much different line-up compared to the one planned for 2020.

Atlantean Kodex remained the headliners of the warm-up show, and I finally managed to see them on June 9th, 2022. I arrived at the venue at about 22.15 straight after work and I missed the previous bands, Fire And Steel, Power Crue, and Achelous. I also couldn’t make the other two days of the Festival again due to work obligations, and I missed amazing bands I very much wanted to see, such as Mirror, Vultures Vengeance, Trespass, Zemial, Solitary Sabred, Traveler, Spitfire, and the mighty Conception. Anyway, let’s not focus on whom I did not see, but on the superb Atlantean Kodex. 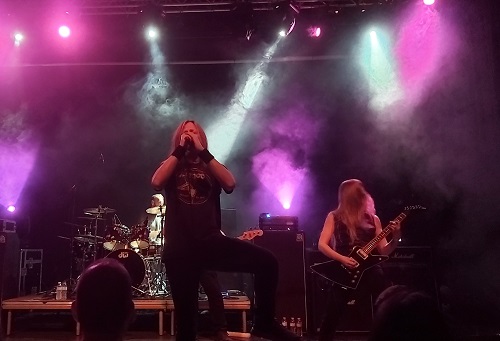 The band came out shortly after 22.30 on the stage of Gagarin 205 and Markus Becker said “Hello, we are Atlantean Kodex from Germany and we play Manowar songs. But we are not as good as Manowar so we are going to play our own stuff”. Haha; I am not even going to comment on that. Then, the first notes of “The Alpha And The Occident” from The Course Of Empire filled the air, and it was magic. The band focused on their latest album during the set, playing six songs from it, something that made total sense because they didn’t really have the opportunity to promote it after it came out. The fans seemed to know the new songs fairly well and enjoy them live. “He Who Walks Behind The Years” was particularly pleasing and really got the crowd going. What surprised me throughout the show was that everyone seemed to be enjoying, feeling, and absorbing the music and the performance, and I was one of the very few taking photos with my phone. I only did it very briefly during a couple of songs only to attach them to this article, and I genuinely felt bad because almost no one else did it. This was a stark contrast to most concerts I have been attending for some years now, where the majority of people hold their phones above their heads and take photos and videos all the fucking time. I mean, go home and watch the thing on YouTube, and leave the rest of us to enjoy the show. You can say whatever you want about true metal and its fans, but at least we are here for the music and not for Instagram. There, I had to say it. 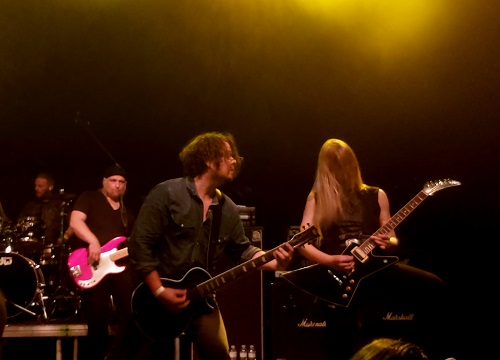 Back to the show, the band was very tight and in sync, even though I noticed some sound problems, especially towards the end in how Markus Becker’s vocals were heard from the mic. In terms of songs, “Sol Invictus” from The White Goddess was the one that probably had the warmest reception with everyone singing the chorus, and it was dedicated from the band to Manolis Karazeris, the man behind Up The Hammers Festival. The momentum was kept when Becker said “at this point, we usually tell you about the tragedy of Europe”, which meant that they would play the amazing “Twelve Stars And An Azure Gown”. Holy hell, what a song! 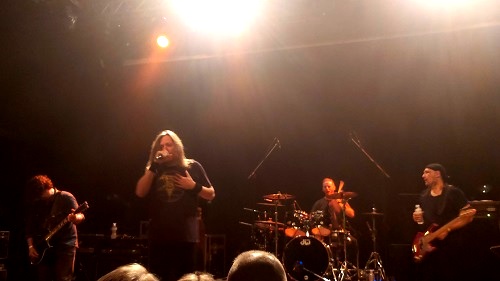 “The Atlantean Kodex” and “The Course Of Empire” ended the show, and the band renewed their appointment for the following day, when they would play again (not as headliners, though). Someone posted on Facebook that they should be playing on all three days of the Festival, and I think that that was actually a splendid idea. I don’t know what exactly makes a live show successful for everyone, but what happened to me is that I went there completely without energy from a gruelling day, got my beer, went to the front of the stage and forgot about everything else when Atlantean Kodex started playing. For about an hour and a half, I got completely lost in their epic storytelling and their thunderous riffs. And when I came out of the venue, I was feeling genuinely happy. 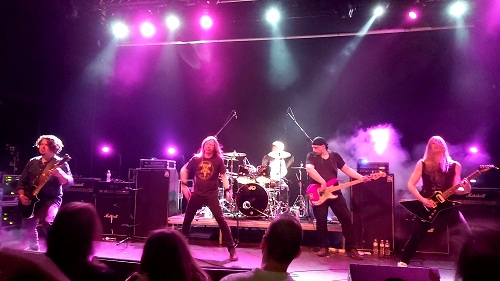 Setlist:
The Alpha And The Occident
People Of The Moon
Lion Of Chaldea
A Prophet In The Forest
Chariots
He Who Walks Behind The Years
Pilgrim
Sol Invictus
Twelve Stars And An Azure Gown
The Atlantean Kodex
The Course Of Empire