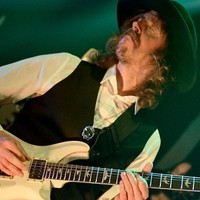 The impacts of the pandemic can be felt far and wide. Touring bands alongside restaurant businesses are probably the ones that have suffered the most from the travel restrictions, lockdowns, and isolation requirements. After a sit-out period of two years, the test for bands is not only to overcome their own pandemic rustiness but also to stand out amongst the busy competition.

If there ever were a global rush hour in the entertainment business, this summer and fall seem to be it. There are so many unhappened events happening that one has to wonder how all the organisers can break even among this high demand for the audiences. Their time may become a limiting factor. But there's also the fact that people have become comfortable and are used to sitting at home. Watching Netflix, as Mikael jokingly–though no less sharply–put it at the show.

Because of that I did and did not find it surprising that a tour-opening Opeth show was not sold out. It was far from feeling even remotely empty but it's somewhat a telling sign when you can manage standing in the second row without actually touching anyone else. Makes me even feel like I've missed out on some gig camaraderie there. But then again, who am I to complain? To paraphrase a saying: an Estonian would probably like to enjoy a show without another Estonian in sight.

With that being said, something was different about this evening. It's the first time I've felt like Tallinn is becoming one of the multicultural cities of Western and Northern Europe. Finns, Latvians, and Lithuanians are regulars around here and don't count towards that goal. However, making my way to the front I chatted with a group of Colombians, a Turkish guy and another Colombian, a Turkish-Mexican couple, and even a gay Arab couple. Granted, apart from the latter the others were (at least temporary) residents but it emphasizes the local diversity even more. I'm not even going to touch on how exceptional was that last encounter. It all felt like this event managed to bring out the best in people around here. So, for a moment at least, it seems that there's hope for this corner of the world.

The support act for this tour are The Vintage Caravan and this is, according to their own words, their third time touring with Opeth. I'm still on the fence as to how the pairing should work music-wise but have little to complain from my own perspective about them being present. I quite enjoy their hard-rocking albums and have seen them twice already, so I knew I'd be happy with another encounter.

On stage The Vintage Caravan do their best and put all the energy they can into delivering their music to the audience. There is, however, the fact of being the support act with an allotted limited time slot. When I saw their headlining show I remarked how the band had grown in a few years since supporting Europe. This time around I'm being forced to conclusion that in a role of a support act one is always dealt a short hand. This is not your audience. You can win (some of) them over but to make them truly your own is an exceptional feat of rare occurrence. It's not that the band weren't good or that the audience didn't like them. The best analogy I can draw is that of trying to make a really hard sell. It's the very act of active marketing of your brand that triggers the wrong emotions. Makes me feel sympathetic towards the band for having to do this in such a fashion. The Vintage Caravan do deserve better. With that being said, I think they did really fine in the time frame given to them. 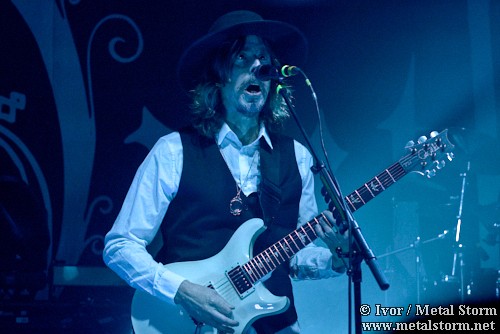 One might think that with Opeth being an established act there's little to prove to their audiences. Just deliver a good show and you're set. However, there's the matter of the pandemic touring gap. The summer festival shows aren't quite the same as the headlining tour: the sets and the audiences are different. Then there's the matter of this being the very first show of the headlining tour. And not the least of it is that this was also the very first show for the new drummer Waltteri Väyrynen, who freshly switched over from Paradise Lost. So you can see there are many factors coming into play even for a seasoned band like Opeth.

The set list was, to quote Mikael, fairly mixed, or, again in his words, like a grand old rehearsal. Dropping the albums from the nineties it featured one song off every album except the latest one, from which there were three. So, in a way, you could still say it's somewhat the In Cauda Venenum tour. The real question is, though, could Opeth have focused more on the recent album(s) without fearing a rain of tomatoes? And that's a tough one considering the pandemic gap and that In Cauda Venenum is by now already three years old. I like the latest-era Opeth but also have a feeling that to up the game in the fierce touring competition at the present time, a discography-spanning selection is a necessity to draw in as many people as possible. What I did enjoy immensely, though, and credit the band highly for that, is the decision to sing Swedish versions of the In Cauda Venenum songs. Props for doing that.

A curious development regarding the band, or rather regarding Mikael specifically, is that of the stage image. In his own words he looks like a rock butler-slash-Amish, but still handsome, though. He seems to have joined with the kind of an anti-anti-statement movement happening for years where established metal musicians put on chic formal or stylish clothes as part of the stage persona. Gothic metal bands aside, Devin Townsend, members of Leprous and Therion are but a few among other sharp dressed men that right now escape me. However, it slightly irks me to see the rest of the band not following (the) suit (make of this pun what you will). I respect that they have their own freedom of choice, though I question the integrity of the image if Mikael is taking it so much apart from the rest. What I find amusing about Mikael, however, is that the older he gets the more he starts to closely resemble Frank Zappa in his looks. I really wonder, though, if music will ever follow... suit.

Even though he alluded to rustiness and nervousness, Mikael and the band seemed to be in good spirits. I think it's the most talkative I've ever seen him on stage and most of it was actually interesting conversation in between songs rather than just banter or humour. He even let the fans order him around. Imagine the following in a very heavy Finnish accent: "Com heeer, Miiikael! - What? What happens there? - Noothing. Com heer!" And then Mikael steps closer to let the guy take a selfie with him doing metal pose, suit and all. It was all cosy and friendly on both sides, I think. The band seemed to enjoy themselves on stage, and the audience seemed to enjoy the varied set. 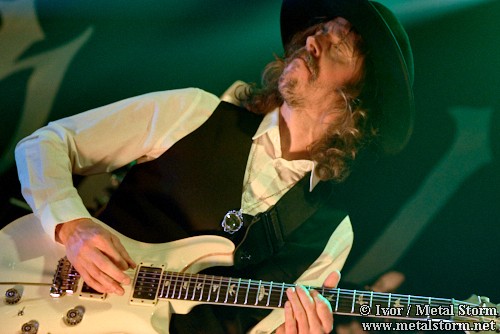 I think everybody were just happy to be out and about in this moment of relative (temporary?) freedom. The question whether the bands lived up to the expectations is somewhat irrelevant. Given that the tour was postponed two (or was it three?) times, both sides were just about relieved it's happening at all. I don't know whether it's because there is this shadow still lurking about and looming above us but the evening with these two bands proved to be a very positive one. Maybe–and that's a big maybe–we're slowly learning to take things as they come and enjoy ourselves in the moment rather than comparing it against our often unfair expectations.