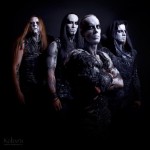 After Nergal's health scare, Behemoth is at it again - to conquer the world. Even though I have seen them play plenty of times over the years, I was rather excited once they got announced to take part in the inaugural voyage of the Barge To Hell cruise. Bassist "Orion" took some time out of his "busy" vacation schedule to sit down with me and answer a few questions.

D.T.Metal: I know you have played on a cruise before in Europe, so what are your impressions on the Barge To Hell?

Orion: So far so good, I really like it. The only thing I expected to be better is the amount of people here. But still, it's a nice experience and we like being here. It's great and there are so many friends here, good bands and fans, and we are going to the Bahamas - I have never been there, so really cool. We have two days with no shows, so just like a vacation for us, well except for talking to you.

D.T.M: Now that Nergal is health wise back in the game, is there something you, as a band, do something different to accommodate his needs?

Orion: He doesn't have any special needs now, he is just the same person he used to be before. He is actually doing better than ever as far as I can tell. I would have to say we don't have to do anything to accommodate to the situation at all. Everything just seems to be going up for us and the entire situation is moving forwards and we just follow it.

D.T.M: As he did have a brush with death, did the daily business routine of Behemoth change since tomorrow could be the last day?

Orion: Tomorrow could be the last day for any of us, but the situation we had with Nergal makes us more aware of this fact. It was just one big lesson and I feel that the way we treat the band, and life in general, now is just - better. We do have a lot more appreciation for everything and we are trying to get as much as we can out of it all, professionally and personally. And everything that is happening with the band, it takes some work, but it's growing, it's hard to explain …

D.T.M: Like a stronger bond as a band in general?

Orion: Not sure if it is a stronger bond since the bond was always there. It's more about appreciating everything that is happening much more than we did before, like the little things in life.

We are actually working on a new album right now and it's going really good. We have been rehearsing for a couple of weeks now and we have about four or five songs ready. We recorded a demo so we can listen to it and see if the approach is the right one. It's going really good and we have scheduled the studio for the end of February. If everything goes as planned the album will be done in the Summer and we plan on releasing it in the Fall of 2013.

D.T.M: You are going back to Hertz Studios? And weren't you involved with the production or studio work on the last album as well?

Orion: The last recording session - I don't even remember how many studios were involved, like six or seven, and lots of sound engineers as well, that's just the way we work. This time we will probably do most of the work in Hertz Studio but we might do some stuff in other places as well. Plus we are still talking about mixing of the album and that's going to be probably somewhere else other than Poland.

D.T.M: So you might go back to Colin Richardson for the mixing?

Orion: He did our last record and it went really good so we are still considering working with the guy again; but there are a few other ideas as well.

D.T.M: Did the role of the main songwriter change in light of what happened?

Orion: It's always Nergal who comes up with some pieces of music first and then we go into the rehearsal studio and we work on arrangements of the whole thing and the structure of the songs. So the final version of ANY song is always the work of the whole band.

D.T.M: Nergal's legal issues in Poland; how does this effect Behemoth with reports from the Polish media that he might go to jail?

Orion: Nergal has issues all over the place, all the time. But he is not going to go to jail; that is the threat, the worst case scenario, it's just not going to happen. Even if he would get charged, the sentence would probably be suspended.

There are so many things happening there, … it's kind of complicated to explain this all in English. But the main court in Poland had to do a statement about his case just for the other, lower court which recites over it, to proceed with the trial. And now they are coming back again - so he might get convicted, but the statement that the Polish superior court made is something that the EU court is not agreeing with. So even if it goes wrong for him in Poland, we are going with the EU court's statement, and that might be a case against the whole Polish country.

Orion: Yes, so however it goes, we have options to proceed in this case.

D.T.M: Did this whole thing effect you, the band, since the Polish media is running rampart with it?

Orion: Well, as for the overall picture I would have to say the media exposure helped; it's press. There is no such thing as bad press. But still, sometimes if you are facing all of those things, and people tell you whatever you do is wrong and you are not supposed to do this or that, you are getting pissed off sometimes. But we are living in a society - well, a big part of what we are saying is against what the government, the authorities and even some people are saying, so we have to be aware of the fact that there is a little crash of opinions here and there. We are living through it; it is life you know. If you choose this path, you have to know that some things may happen.

D.T.M: What's on next year's calendar for Behemoth other than the new album of course?

Orion: I am pretty sure I can talk about that; I don't think it is confirmed yet but we are coming back to the States this summer to play on the Rockstar Mayhem Festival. This will be the very first thing we will do before the new record comes out. After that we plan on doing some other festivals, but they are not confirmed yet neither. We have done quite a few European festivals this year (ed. 2012) and I am not sure if it would be the best thing to do before the album comes out.

D.T.M: Cool, thanks for the interview and I guess I will see you at Rockstar Mayhem.