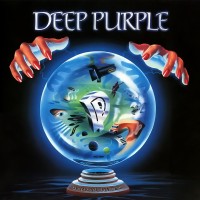 
Everyone agrees that Deep Purple is one of founders of hard-rock and one of the bands that made a name for themselves in the most wonderful era of music, the 70's. At the time, 1990, Deep Purple already were an icon lead by the guitar genius Ritchie Blackmore. Slaves And Masters was the only album with Joe Lynn Turner, and definitely one of the most controversial and criticized albums of all time in the history of Deep Purple. This formation is known as Mark V, one of the many changes in the band's formation.

Slaves And Masters is from far my least favourite album of Deep Purple, it's clearly a "rip-off", copy cat of the partnership between Ritchie and Joe in one of the greatest bands in rock Rainbow. Rainbow's albums with Joe, although being the worst albums the band composed are still good rock albums and capable of being in the collection of any rock fan. Well Slaves And Masters is that... but with less quality in every way. Technically the band stands together and makes a good performance but this album doesn't contain any of the elements that made Deep Purple famous throughout the world. I think that, if the fans complain about this album, they complain not of the performance of the members of the band but of the concept of the album. Most tracks are about love with a mix of Whitesnake and 80's Rainbow, the only songs that are actually hard-rock oriented are "Breakfast In Bed", "Fire In The Basement", and "Wicked Ways" which are the best on the album.

Lyrically the album is okay; Ritchie, Joe, Roger and the others are great songwriters and they kept their usual performance in this area. Like I said above, technically the performance was solid, the album has good riffs and sometimes good solos not something amazing from someone that is one of the best guitar players of all time but still decent. The best thing on the album is the production that I truly like. I really admire the talent of Roger Glover not only for bass but also for production, definitely he is one of the greatest artists in the music industry.

All in all, what puts this album in the bottom of the band's discography is the concept, the fact that they composed something that was so usual to hear in the 80's. They didn't try anything special. Nowadays, none of the songs in this album are in the setlist of the band for live shows. It's definitely a consequence of the failure this album was, even the band knows the level this album is at compared with other classics. Slaves And Masters is not a a complete disaster, don't take me wrong, but it's definitely the worst album the band ever made. Although, it had a relatively successful tour in 1991 it was way too melodic for the hard-rock fans of Deep Purple.