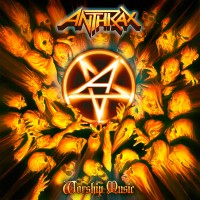 
"At last!" one might shout being finally able to lay hands on the newest Anthrax effort, Worship Music. Eight long years we waited for some new material. Well, alright, new material released officially on CD. It's easy to assume that the role of this album - apart from bringing some good music of course - was to prove that Anthrax didn't vanish and are still here to remind the youngsters what thrashing is all about. Did they manage to do it? Well...

The CD is a mix of great tracks, bad tracks and it's-a-shame-that-they-wasted-such-a-good-idea tracks. I think everybody on the first listen skips the intro "Worship" just to get to the proper content of this album. And Anthrax decided to introduce everyone to the 2011 version of the band with...blast beats. Yeah, I know it was Charlie Benante who invented this drumming technique, but in my opinion it just doesn't fit. Plus, the song itself is really weak. Even though the beginning may not encourage you to get to know the whole LP, stay patient since after "Earth on Hell" we get to hear some really decent music.

"The Devil You Know" is probably the biggest Anthrax rocker since... well, a long, long time. It starts inconspicuously, but then comes a great riff and an extremely catchy chorus that's been in my head since I listened to it for the first time. I'm pretty sure it will become a solid crowd-pleaser in the near future. "Fight'em 'Til You Can't" is the most thrashing of all the non-thrashing songs on Worship Music. I'd use the last of the mentioned track categories to describe "I'm Alive". Great riff, but the overall structure of the song, mainly vocals, are simply dull. The track that caught me immediately, right with the first listen, was "In the End". It's just the best piece on this record, hands down. It contains a massive riff, a great harmony and an unbelievably catchy chorus.

And these are, unfortunately, all the songs from Worship Music deserving a mention, because the rest could be just as well not released. They are just uninteresting, boring and the newest effort by Anthrax would be better off without them. So let me just pass them over in silence.

Summing up, this isn't what I expected. My attitude towards this album and my hopes for old-school thrash seem naive when thinking about them now, but this is the truth. And I guess I would be much more excited about Worship Music if it was a CD of the aforementioned genre, even if worse in quality. But the reality is that Anthrax have changed and there's no point in begging them to go back to their roots, because it just won't happen. They didn't live up to my expectations (and I guess not only mine), but after discarding my initial attitude, I was able to see the album as what it really is. Actually, it contains lots of great moments. Of course, there's some way too modern crap, which bothers me as a long-time 'Thrax fan, but from now on I'll try to focus on the better half of the album and wait for some gigs, as some tracks have massive concert potential.