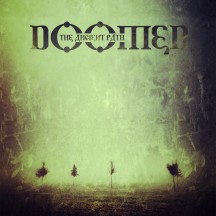 
Quick! Guess the genre! It's ironic, though... Despite the name, Doomed is an unusual band to me since I'm not particularly familiar with one-man doom metal bands. Pierre Laube is the man behind this project, taking care of all instruments and this is his debut. I wasn't sure what to expect at first but we seem to have a talented guy here!

So what you get here is death/doom. It is pretty standard but Pierre seems to take care of that in the best possible way: by simply putting out a great performance with some well written songs which is of most importance in the long run. His strongest weapon is obviously his guitar. There are plenty of crushing riffs throughout the course of this roughly 50 minute album which prevents the music from getting stale but the leads is what takes the bigger part of the cake here. It has been a while since I heard a death/doom album that puts so much emphasis on leads. They are a constant feature on this album, helping set the right tone for particular moments in the songs. A sorrowful melody, melancholic sounds or even a hopeful tune as if the guitar itself was the main vocalist. That's not to say the vocals go unnoticed! Even though they stay firmly in the low range of the growl-scale during the whole album, they are very strong and roaring. Combined with the heavy riffs and drums, the vocals invoke an imposing atmosphere. A great example of this is definitely the opener "Sun Eater". This song sets the mood instantly for the rest of the album with its main riff being already quite a colossus on itself and gaining more power once the leads and vocals rear their heads to the surface resulting in an almost apocalyptic vibe.

If I were to name another highlight, it would have to be "She's Calling Me" which is my personal favorite. During the last couple of minutes, the song slowly seems to get what sounds like post-metal influences with some great and almost prog-like guitar work along with leads that culminate in a nice melodic crescendo. Some similar sounds are scattered here and there but not nearly as developed. I think Pierre is onto something great with those sections since they blend well with the overall death/doom sound of the album and I can only wish that he pushes his music a bit more towards that path.

All in all, The Ancient Path is a great debut. Even more considering that everything has been done by one person without a label at the time. While it might lack on originality it shows a good deal of professionalism in terms of songwriting and production. Now that this project has been signed by Solitude Productions, the best is yet to come.