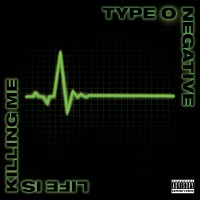 
I was a bit of a latecomer when it came to discovering Brooklyn's own gothic influenced-metal/black humoured Black Sabbath/Beatles inspired Type O Negative. Although T.O.N.'s earlier albums had some fine moments, it was 1996's October Rust that opened my eyes to T.O.N.'s creative side and persistent self-parody/black humour. The follow up [1999's World Coming Down] album was, in my own opinion, a solid effort. However, it failed to meet the standard set by previous releases, and failed to make the impact that most would have expected from the band.

In the four years in between albums, the D.V.D. After Dark and the anti-compilation The Least Worst Of Type O Negative [both released in 2000] have kept fans happy [or miserable for that matter] until now.

While many faults have been pointed out in hindsight in regards to World Coming Down, bassist/vocalist Peter Steele [along with guitarist Kenny Hickey, drummer Johnny Kelly and keyboardist Josh Silver] vowed to get the band back on track for their fifth full length album Life Is Killing Me.

Typically, the album opens up with a short instrumental piece, with 'Thir13teen' being a cover of the incidental music from 'The Munsters' done in typical T.O.N. style. Next up is classic T.O.N., 'I Don's Wanna Be Me'. There's a slight punk feel to the track, and on the whole is one of the albums more faster paced numbers. Following on in the same hard rocking form is the hilarious [lyric wise] 'I Like Goils' [featuring back up vocals by ex-T.O.N. drummer Sal Abruscato] and the cover of Hedwig And The Angry Inch's punked up anthem 'Angry Inch'. Experimentation is the key to the Beatles tinged 'Less Than Zero', while '[We Were] Electrocute' takes the Beatles influence a giant leap further.

Of course, the album wouldn's be complete without the T.O.N. Black Sabbath like monumental dirge numbers, and 'Todd's Ship Gods [Above All Things]', 'IYDKMIGTHTKY [Gimme That]', 'Nettie' and the title track fit the bill perfectly. The departing number 'The Dream Is Dead' is the bittersweet icing on the decaying corpse that is Life Is Killing Me, and is an almighty morbid return to form for T.O.N.

The album is a little on the long side [at seventy-five minutes], and there are a couple of fillers that could have easily made suitable B-sides for singles, but overall, this is everything that World Coming Down should have been, and a whole lot more.
Written by Justin | 03.09.2003