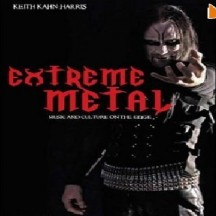 
A long time ago my dad was a communications and film professor; I grew up used to looking at books with titles like Structuralist Phenomenological Perusals Of The Western Film and other comparable things—books written by academics, for masochistic academics. Extreme Metal: Music And Culture On The Edge belongs to that category.

Had you told me that in 2008(ish) when I purchased it*, I'd have gladly said bring it on. My body's ready. Which I did basically say. I, a pleb with an Amazon account, actually forked over money for this book.

It went unread until about a week ago, though. A good thing, I suspect, considering all the many lines in it that would have confused me into thinking they were profound. Lines like this one from Chapter 7, "Reflexivity, Music and Politics" about Fenriz's "Jewish behavior" quote from '94:

Or this gem from chapter 5:

Quote:
"Scenes tend to entrench capital within them, but while capital differences can become institutionalized within scenes, the quasi-autonomous relation of scenes with each other means that individual scene members are never entirely bound by their location in one particular scene."

Why not just say something along the lines of "Darkthrone used racism to be transgressive, not to actually push a fascist agenda"? (That is, if I even understand what he was trying to say in the first place.) That line wouldn't even have to be that terse, but, I mean, come on. Surely there are only so many times you can write "scene" in a sentence without a compulsion to bust out a red pen. The book needed more editing and proofing; Professor Harris needed a Susan. His points can be engaging, but it can be a real chore discerning what the fuck he meant more than half the time. Then again, I'm no academic, and this book was ostensibly written for academics. But it's available to anyone.

Once past the convoluted language of it all, there is a solid chunk of analysis that's definitely worth noting in here though. I don't really ever think about the sociological explanations for why people listen to metal (that is, if any even quasi-universal ones exist), or explanations for why so many people find death metal and black metal so unpleasant while others love it, or why there are so many more male metalheads than female ones. Professor Harris did and does, however, and humoring him here isn't pointless. In fact, his thoughts on the subject can be quite sharp and he astutely references other writers who've tackled the topic of music in general. Extreme Metal is thorough and Harris clearly approached it all very thoughtfully.

Consulting this book every now and then isn't necessarily fruitless, in other words. Harris has a lot to say on the subject. It's just not particularly well put.

That and I generally don't really give a damn what the explanations might be for why extreme metal and extreme metal fans (Harris promulgates the view that extreme metal fans do in fact, as a whole, constitute some kind of international "scene") is the way it is--sometimes art stuff is better left unexplained.

When that art stuff is adopted by "scenes," however, then it can be interesting to delve into their social inner-workings. Which Harris does. He just could easily have made a book more people who actually care about and follow extreme metal might be inclined to read, not just academics and pseudo-scholars like 2008 me--fuck 2008 me. That wasn't his goal though, I'm sure.

*The book was published in 2007, why review it now? Because fuck you, I felt like book reviewing, that's why.