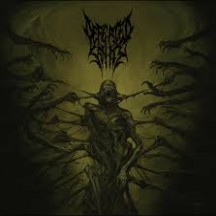 
Defeated Sanity play brutal/technical death well—they aim to counterbalance their sweepy wanks in all their counter-intuitive insanity with the kind of stupid, visceral pounding BDM fans seem to want and expect. They're in the business of blending the cerebral and the slightly pretentious with the animalistic and id-tickling, which is what you'll get on this thing.

Problem is, overall, they didn't live up to their name here. Sanity won't be defeated. The goal seems to be to get the listener smearing shit on walls and babbling loudly about papayas and the atomic bomb. This won't do that. If you've got a Mr. Hyde in you and you play this for him, he'll probably just shrug. It's not that crazy.

In general, it does sound pretty good though. Despite the lapses into tech psychosis, it's really just an album to throw on and bang your head to. It's dirty and violent and brutal and whatnot, things I can't complain about at all. Where it really shines is when the confusing licks go away for some grimy slammingness to take their place. That just doesn't happen enough on this to keep me interested, though. It's a spin once, flail around a little, then move on sort of deal.

That said, if you listen to a band like Obscuraand you can only think about how much better it would be if there were more brutals, then my guess is you'd find enough to dig on Passages Into Deformity. Otherwise? It's got a lot to offer on a quick spin (it's pretty short), but nothing that's going to get me to come back to it any time soon.