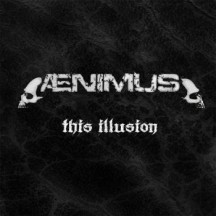 
After a brief piano intro steeped in anticipatory mystery, Ænimus ignite their debut album with a spark of youthful, exuberant power metal. Mellifluous, sometimes ominous, and always memorable, Ænimus have a lot to offer up on This Illusion.

Boy, there's nothing like some good, old-fashioned helium vocals. Anders Sevdin hits notes on this album previously known only to dogs and robots. During the recording, his stratospheric screams must have shattered more glass than the Tsar Bomba. "Battle's End," a somber, enchanting piano ballad, gives him a chance to further drive home how glorious his voice is; emotion flows through him even as he reaches for those unbelievable high notes. From time to time, Sevdin coaxes a Danzig-esque throatiness from his pipes that lends him some further personality.

The songwriting is pretty straightforward; simple structures and catchy melodies are what you'll find on This Illusion. What captures my attention more than some of the songs is the sound of Ænimus itself. Powerful vocals, sinister and distorted guitars, and delightfully garage-y drums make this album worth listening to just to hear the musicians interact with each other. Of course, there are some brilliant songs here; "Seven Circles Of Hell," "End Of Days," and the aforementioned "Battle's End" are tunes for the ages.

This Illusion starts to decline over the last few songs, but they cap it with a lovely cover of that eternal classic, Black Sabbath's "Children Of The Grave." Everyone from Amon Amarth to White Zombie has covered "Children Of The Grave"; covering Sabbath is sort of a rite of passage you go through as a metal band, and this is one of the big ones. Nonetheless, Ænimus come out with a version that is refreshing and interesting. This probably ranks among my favorite Black Sabbath covers.

I can tell you that I won't be shutting this band away to be forgotten in my massive library; I shall be returning to this album even after I've finished writing this review. This Illusion is quite a strong debut, and I look forward to hearing more from Ænimus (and Anders Sevdin) in the future.