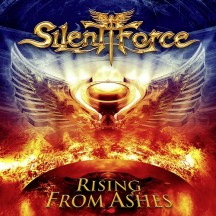 
Have you ever wondered what would have turned out if Def Leppard played power metal? In the name of your mental sanity, I hope not. Anyway, the result would have been Silent Force.

Rising From Ashes, both in the album title and content, symbolized this rebirth, revealing to us a renewed and strong band, that cut some bridges with the past while not disowning it.

As the progressive influences that enriched Silent Force's music in the early years fade away, they get replaced by an increasing amount of 80's rock. This, in fact, should be more correctly labelled as "power hard rock", despite how strange this may seem. There's not this much of up-tempo, double bass tracks, and neither are there happy-go-lucky fun tunes present or, to put it simply, these aren't those that gained the not-so-acclaimed label of "flower metal". On the contrary, Rising From Ashes is mid-paced, well-cadenced and solid: indeed, all features it shares with hard rock.

The new members have introduced themselves at best. Michael Bormann had huge shoes to fill, as replacing DC isn't easy for anyone, but his performance righteously enters among the many ups of this album: well incorporated in the music and not afraid to show personality, he equips Silent Force with new roughness, and throughout the whole album there's not a moment in which he doesn't sound perfectly at ease. Keyboards always played a crucial role in the band, and Del Vecchio shows what he's capable of, both in the song structure and in the duets with Beyrodt, while Bormann delivers a finally audible bass.

Alex Beyrodt's work shouldn't be new to anyone passionate about this genre: his riffing is a pillar around which the entirety of each song is built, and the leads, with the above-mentioned interlaces with the keys, are all engaging and scream to the listener "do NOT stop this song!".

Rising From Ashes is a catchy, concrete album, has great moments and has balls, but is it going to become a classic? No, it's not, and this is mainly due to the little variation between one track and another, both in the structure and in the mood.

Written on 02.03.2014 by
R Lewis
Hopefully you won't agree with me, diversity of opinions is what makes metal so beautiful and varied.