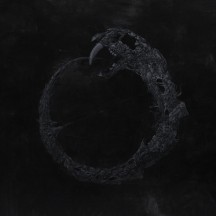 
This whole blackened sludge foolishness seems to be developing into a pretty legitimate fusion within metal circles as of late. In case you weren't paying attention, back in 2010 the Americans in Coffinworm carved a pretty fine name for themselves in this emerging scene with When All Became None, which has slowly gained praise as one of the highlight albums of the style. Four years later, we see them following up on that release. Coming off of an album that's been so well received is never an easy task for a band, but in this case Coffinworm are rising to the challenge and triumphing.

For Coffinworm, IV.I.VIII (that's 4.1.8 for the ones who never got in on Caligula's orgies) essentially feels like the natural continuation of their previous album, albeit with a few minor differences. Perhaps most evident, whereas When All Became None kept to a mostly moderate tempo, even doomy at some points, the band's sophomore album sees a significant increase in speed, as opener "Sympathectomy" makes clear right off the bat, and "A Death Sentence Called Life" reminds in case you forgot. In such instances, the guitars take much more of a black metal tone as well, in a way making the combination of the two subgenres feel a lot more complete than on the previous album.

Having said that, Coffinworm have by no means abandoned their sludgey nature that forms the core of their sound. IV.I.VIII is, as could be expected, a filthy riff fest: groovy, violent, and pleasantly catchy. Sometimes these riffs can feel like they just drag on and on, but for the most part they always seem to be cleverly spinning around each other, working towards a climax that feels whole and naturally built up when it finally arrives, "Lust Vs. Vengeance" being quite a fine example.

When compared against When All Became None, it's honestly very difficult to say whether or not IV.I.VIII is better or worse, and ultimately for many listeners the answer will be likely to come down purely to a matter of listening preference. Both albums are unquestionably quality cuts of blackened sludge, although I personally find myself preferring IV.I.VIII because here the sludge and the BM elements feel a lot more leveled out, and although the necksnapping moments aren't in the majority, they're certainly present to the point of satisfying those who were looking for them. Coffinworm have proven their consistency of songwriting with this second full length, and where some other bands within the blackened sludge style have seen a bit of a decline in quality following their "best" album, these guys are staying strong and remain unconquered. Sludge AOTY? Quite possibly so.

Ready for some bleeding ears?

Written on 22.06.2014 by
Apothecary
Comforting the disturbed and disturbing the comfortable since 2013.
More reviews by Apothecary ››