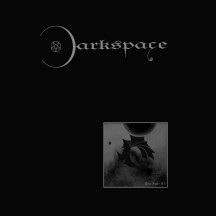 
So, one of the biggest ambient black metal bands released their new album this year. Time to lose some words on that. Darkspace from Switzerland continue their journey through the dark space (no pun intended as it's the actual name of their albums) with Dark Space III I. And not only that but even the songs are simply called "Dark 4.18", "Dark 4.19" and "Dark 4.20". Looks like the band is quite out of ideas, doesn't it? However, the important point is the music, so let's have a closer look at that.

The band plays ambient black metal and though I'm no expert in this sub-genre I can say that it is more ambient than metal. So let's call it ambient music, made with synth sounds and chilling soundscapes. From this we can view upon the black metal parts as a mere addition to the atmosphere with other elements, namely guitars, bass, vocals and programmed drums. A few words should be used to describe the drums here. The band doesn't even try to make them sound like real ones, they are more of an ambient element and mostly build up a simple drum wall as background, which makes the other instruments sound harsher and the music overall colder.

As I said I'm not too familiar with the genre and I also didn't follow the band until this year. However, from my listening experience of Dark Space III I I would describe the music as some sort of sci-fi ambient with black metal elements. I didn't pay attention to the lyrics, yet there are some spoken phrases in the end of "Dark 4.20" that sound like a part of story with its plot somewhere in space. The end is quite a cliff-hanger and leaves the listener waiting for the next album. The music in general has great elements and building a huge atmosphere. As there are sounds of technical stuff here and then and this overall space-like sci-fi feeling, it is quite unfamiliar for the standard barbarian black metal fan. Maybe rather ambient fans are attracted to this music, yet I think it's quite easy to get into as it has a relaxing component which combines very well with the cold and eerie black metal parts.

To summarize, Darkspace deliver a very good album here, recommended for both black metal and ambient fans, though the latter ones may have an easier access to it. From the structure and story telling parts it seems as if it's part of some kind of saga that goes on for several albums, long year fans may forgive me if I'm wrong on that. Dark Space III I leaves a curious, yet satisfied feeling like a good movie with more parts to come. The music is cinematic and therefore great for anyone who has time to relax and let pictures in his head be built up by it. I really hope it won't be too long until the next album comes out.
Written by Windrider | 13.12.2014