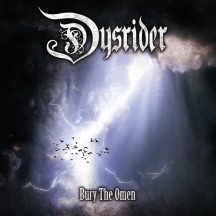 
Formerly known as Trophallaxy, these Swiss players changed their name for the new record. Bury The Omen features symphonic metal, yes, but also a large death and melodeath quotient. It's really an interesting combo because sometimes one style is more clear and other times it's bundled into this sticky ball of genres-be-damned goo. Quite cool.

They have two vocalists who share duties and help make the music a bit more vague for classification. The death vocals by "Jonathan" are excellent. The clean vocals by "Joelle" are, well, god-awful. Seriously. Did anyone listen to this in the recording studio and say to themselves, "wow, Joelle sounds really great." She's also the cellist so maybe they just needed a cellist that badly and she said, "fine, but only if you let me sing." To which they begrudgingly agreed. Who knows. The point is she's here and trying her best to ruin a decent album.

Bury The Omen actually does quite a bit right and displays fun compositional ideas. Unfortunately there is a similarity and a straight line in the mood that rarely lets up. You gotta break it up sometimes, guys, if you want to take it to the next level. If the songs don't differentiate much, fine, but there must be some kind of arc in the record as a whole. I thought long and hard and have decided not to place all the blame on the annoying clean vocals. Even if the luscious death growls were the only voice then the music would still feature some underdeveloped themes and ideas.

It's hard to focus on that, though, as the clean vocals are everywhere. She's really pretty terrible and should stop singing in metal bands immediately to focus her amateur acoustic 3-piece that plays Ren Faires (which I really hope she has on the side since her voice is suited nowhere else on the musical spectrum). Who knows if these guys are stuck with her or not but it would behoove them to either find another clean vocalist or preferably just eliminate the position entirely. Dysrider could easily survive as a great symphonic death metal band; it's not a crowded genre and they'd make quite an impact. They have sweet melodies worked into the foundations of their music, not to mention a fantastic extreme vocalist. Up the already excellent death metal element, develop the compositions a bit more, and let the rest of the music take its course. I'd drop everything to buy that record.

Written on 28.02.2015 by
Susan
Susan appreciates quality metal regardless of sub-genre. Metal Storm Staff since 2006.