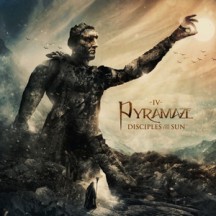 
Many of you are already familiar with the awesome progressive power metal of Danish Pyramaze. Yet, others among you may only know them as the band that Matt Barlow joined after his post-Iced Earth absence from metal, only to leave after recording one album, re-join Iced Earth, then quit again. Nonetheless, Pyramaze was great before and they're still pretty damn great. This Disciples Of The Sun, seven years since their last record, is easily their best yet.

The current line-up now features the legendary Jacob Hansen in the songwriting department as well as on bass and guitar (ex-Anubis Gate, ex-Beyond Twilight, and about 1000 others), and the Norwegian Terje Harøy on vocals (Teodor Tuff, ex-Memorized Dreams). Although Harøy sounds nothing like Barlow or previous vocalist Lance King, which is very refreshing, his voice does meets the same qualifications on paper: great lows and highs with an inherent grit and harshness to it, and a huge emotional range. This dude is just amazing, both unleashing raw power and showing a full command of his voice. Where has he been hiding all this time? So happy to hear such a voice as this united with a top-notch band such as Pyramaze. Above all, it's really nice when new vocalists don't try to emulate the previous ones, which really lets this album soar on its own.

Speaking of soar, the symphonic elements of Jonah Weingarten's keyboard and the guitar solos of Toke Skjønnemand and Jacob Hansen soar indeed. All these epic melodic elements work together, none overpowering the others, to let loose a wonderfully dark atmosphere of guitar-driven progressive power metal. Not to leave out the drums of equally legendary Morten Gade Sørensen, who vigorously leads the rhythm section, always marching onward, and providing the catalyst for these high-energy performances. Thanks to him, one thing is true: this record never drags. It flies on the wings of solid tunes, robust performances, and ornate mood.

Amidst fellow power metal greats laying out their 2015 releases, Pyramaze confidently delivers one excellent and exciting record that will stand up to any of these come year-end.

Disciples Of The Sun releases May 22nd. Hear the album teaser here, then pre-order from Inner Wound Records.

Written on 31.03.2015 by
Susan
Susan appreciates quality metal regardless of sub-genre. Metal Storm Staff since 2006.