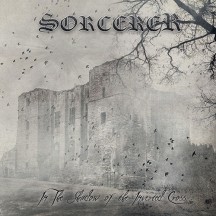 
Crawling out of the depths of history come Sorcerer, the Swedish epic doom band whose story is similar to that of recent successes Hell; they came into being back in 1988, but disintegrated shortly, leaving only a handful of demos and compilations to trickle out periodically over the decades. In 2010, vocalist Anders Engberg and bassist Johnny Hagel resurrected the band with some new blood, eventually getting around to recording a proper album. It might be 27 years overdue, but In The Shadow Of The Inverted Cross constitutes Sorcerer's official full-length debut; unlike Hell, however, Sorcerer have chosen to let their old demos stand as they are, opting instead to fill their first true album with all-new material.

The results have made the great efforts worthwhile. Though it takes time to settle in, by "Lake Of The Lost Souls," Sorcerer have really hit their stride; it marches on with the same tense electricity that graced their demos. Stylistically, it differs little from Sorcerer's old material, with wailing choruses and Sabbathian riffs as far as the eye can see. Most of this album's faults lie with the production; the edges have been sanded away and the obscure veterans brought into the modern era. Sorcerer have lost some of the mystery and primal, imperious force in this more polished, tamer sound; even in epic doom, rawness goes a long way in selling the songs. This Sorcerer sounds too open, too clean, too friendly. Some passages, inexplicably, ditch the secretive ethos of doom metal for brash rock riffs - or perhaps are just played with the bull-headed flatness of a young hard rock band. The combination makes little sense and further detracts from the otherwise sinister atmosphere.

Having rained on their parade enough already, it is also necessary to note that Anders Engberg has done the impossible and defied time itself. In over two decades his voice has not aged a day; he soars through these songs like Jag Panzer's Harry Conklin or the great Messiah Marcolin. While he cannot undo the modernizing effect of the production, his angelic vocals go a long way in preserving the true spirit of Sorcerer. In The Shadow Of The Inverted Cross sports some excellent guitar work as well; though flashy and still a bit too hard rock at times, often the solos add a spark of further interest to the songs.

In The Shadow Of The Inverted Cross does not surpass Sorcerer's demos (nor, of course, the transcendent Sorcerer compilation), but it is a very respectable debut, and I have to respect them for writing new material rather than revisiting the vaults. They held onto the magic after all these years, and hopefully will continue to be productive.