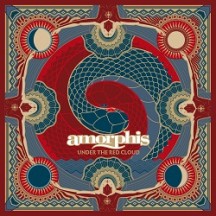 
Amorphis is one of the sure values coming out of Finland. Everybody knows (or should know) their early history as a melodic death band. 1994's Tales From The Thousand Lakes remains to this day a classic album. These musicians have been together over 10 years with their current lineup. Emblematic singer Tomi Joutsen was the last piece of the puzzle that led them to a trailblazing second career that started in 2005 with the release of Eclipse. Let's fast forward to 2015. Under The Red Cloud, with that eye-catching psychedelic artwork, is their 12th studio release expected September 4th through Nuclear Blast.

After 5 high-quality albums the band decided to change horizons by holding recording sessions in the famed Fascination Street Studios in Örebro, Sweden. Producer Jens Bogren pushed the guys to sound more aggressive but also to be more adventurous. Oriental melodies and folk influences make their apparition while tracks have more edge. Bogren's history with bands like Soilwork, Dark Tranquillity, Moonspell and Kreator must have helped shape this harsher sound. In this framework, Esa Holopainen and Tomi Koivusaari both seem to have rekindled their love for those crushing melodic guitar leads. Drummer Jan Rechberger is having a grand old time blasting beats, Niclas Etelävuori fills in his role as bassist extraordinaire to perfection. Santeri Kallio manages to steal the spotlight at times with his piano and keys. Tomi Joutsen continues to assert himself as one of the finest vocalists in the genre. More importantly, the band really emerges as one unit, tight and impressive all the way through.

A few guest appearances add another dimension to the songs. Chrigel Glanzmann [Eluveitie] produces his flute magic on a couple of tunes. Martin Lopez [Soen, ex-Opeth] plays percussions on "Death Of A King" and Aleah Stanbridge [Trees Of Eternity] provides some intriguing female vocals. As a result, tracks on Under The Red Cloud are more distinct than on their previous albums.

Under The Red Cloud is a 50-minute offering of a more varied brand of Amorphis. It features memorable moments, an edgier sound and above all, killer tracks. It is impossible for me to pick a favorite one. I have been listening to this band for a long time. This new album is easily on par with their best albums to date, if not better.

Written on 28.08.2015 by
Dream Taster
Bringing you reviews of quality music and interesting questions such as: