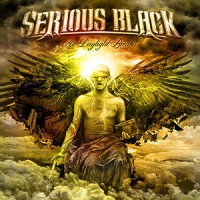 
This album is a worthy listen to begin with. Despite the various comments that it's generic or that it should've been released in the 90's, one would be wise to give this at least one spin.

Urban Breed has been a growing name in the melodic metal community, having been involved with bands like Bloodbound, Tad Morose and Trail Of Murder so there's no doubt that the veteran members of Serious Black knew who they wanted to handle the pipes on their epic songs.

The good thing about this album is that it doesn't bore the listener due to its consistency alongside catchy melodies throughout its entirety. While your typical cheesy ballad is almost absent on As Daylight Breaks, there is one gem of that sort and that is the title track. This could be the best ballad since Stratovarius' nature epic "Mother Gaia". Thanks to the beautiful orchestration and the angelic soaring vocals of Mr. Urban Breed, one feels being taken to the shire in the "Lord Of The Rings" movie. Another one of these soft (but epic) moments is the intro part of one of the highlight tracks "Sealing My Fate". The piano along with the vocal melody are phenomenal and the song evolves into a dramatic power metal anthem that will keep you singing for weeks.

Production wise this album is as good as it can get. All instruments have their share in the mix and the drums specifically sound perfect, which was not surprising considering that none other than Thomas Stauch was behind the kit. His fills are all the same as they were in Blind Guardian. Fast, precise and intense that only adds to the adrenaline of the songs. Just listen to "Akhenaton" and the double bass fill at the end of each chorus keeping in mind that the aforementioned song about the Pharaoh, Akhenaton, could be ranked among the best power metal songs ever made. Moreover, it's clear that ex Helloween guitarist has still a lot to give to the metal world considering all the masterpieces on this album.

With highlights like "Sealing My Fate" "High And Low" "Akhenaton" "Listen To The Storm" and the title track, it is hard to ignore the potential of this super group. It is highly recommended for all melodic, power and heavy metal enthusiasts. If you haven't given this a chance now is the time to get acquainted with one of the best releases of 2015.