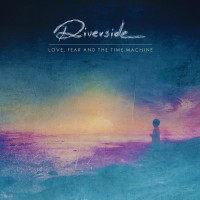 
Riverside's sixth studio album is a more acoustic-driven affair, but with the same high standard of songwriting established on previous albums.

Polish progressive rock/metal band Riverside have been one of the most consistent groups of their kind, who are yet to release a bad or even disappointing album. Love, Fear And The Time Machine continues the stylistic trend starting from Shrine Of New Generation Slaves, with an even less metal and more acoustic rock approach.

Although Riverside arguably hit their creative peak with 2005's Second Life Syndrome, their sixth studio album is nevertheless an impressive addition to their discography. The opener, "Lost (Why Should I Be Frightened By A Hat?)," immediately sets the mood for the album, triggering feelings of nostalgia from the distant past.

As with Shrine Of New Generation Slaves, there is less distortion in the guitars, with the keyboards and acoustic guitar more predominant than ever. Michal Lapaj provides a variety of organ and other synth effects to maintain a fresh and interesting sound, and frontman Mariusz Duda shines with both his bass and vocal abilities throughout. "#Addicted" features a distinct bass riff and a chorus somewhat reminiscent of The Cure, resulting in one of the album's more memorable tracks.

The closing few tracks of the album exhibit some of its more emotional moments. "Towards The Blue Horizon" begins with an exquisite acoustic section, transitioning into a heavier section which borrows from Porcupine Tree to a fair extent. "Time Travellers" is a beautiful anthemic ballad, probably Riverside's best acoustic song since Out Of Myself's "In Two Minds".

The production on Love, Fear And The Time Machine is near flawless, though some may be disappointed by the reduced instrumental layering and more minimalistic sound, when compared to the grit of earlier releases. However, the crystal-clear mix compliments the tranquil nature of album very nicely, along with the beautiful album artwork. Overall Riverside fail to disappoint, releasing one of the better rock albums of 2015.