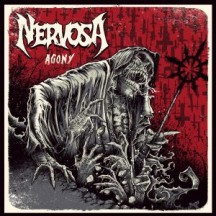 
It's difficult to believe that Nervosa is only a trio. Able to wield the muscle and bulk of a death metal band without taking on too much to weight to cut loose and mosh through most of the album, this latest flag-bearer of the Brazilian thrash tradition has a thick, brutal sound that doesn't entirely save Agony from middle-of-the-road songwriting, but captures attention long enough to get the hooks in.

Fernanda Lira snarls with such force and conviction that, even if the lyrics don't have much truck with me, I don't tire of hearing the strains of Schmier and Tom Angelripper coming through. Memorable vocal delivery goes a long way in selling a band, especially if there are some genre-standard songs to be compensated for, and Agony is nothing if not a lot of old thrash tropes packed tightly together. The album offers slightly more than meets the eye, though.

"Deception" has the cadence and spastic, spurtive riffing of a Cannibal Corpse song; after this song plays out its obvious indebtedness to death metal, Agony's deathly side becomes more prominently exposed. It has been a while since I last heard a death-thrash band that could attend to both sides of the label without simply smashing them together. Death-thrash as a genre has never been all that interesting to me, due to the fact that so many artists seem to achieve that sound by taking the blandest aspects of each genre and simply playing them more angrily. Nervosa can incorporate thrash and death into each other without actually mixing them together; even if Nervosa's sound has an ocean of precedent out there and most of the songs on Agony aren't particularly memorable, Nervosa's approach to playing makes the band stand out just a bit more than the norm in my estimation.

By and large, Agony follows the rules of the thrash genre; there is nothing here that you haven't heard on the last couple of Slayer albums. "CyberWar" is fun in a traditional manner without getting too mired in its own unsustainability, and the half-Death Angel, half-Sepultura "Hypocrisy" shows off some ear-catching lead guitar work. "Wayfarer," the album's closer and longest number, pulls back for a swinging, cleanly-sung blues number that soon descends into more chthonic riffing, ultimately turning into some kind of cross-genre thrill ride with the most interesting riffs present on the album.

Most of Agony is pretty enjoyable as another fair-to-middling modern thrash album, spiked with more gruesome death metal elements throughout. Only in the last few tracks do Nervosa's real talent and songwriting ability begin to manifest themselves in earnest. The sudden stylistic shift at the beginning of "Wayfarer" came as quite a shock at first, but after further consideration, it seems that Agony ends just as it is getting interesting. There is always more room for standard thrash or death-thrash in the world, but I think we'd all still prefer something more interesting than that, and Nervosa apparently has the capability to provide that something. Let's hope that the band can nurture and fully manifest the promise shown at the end of Agony.