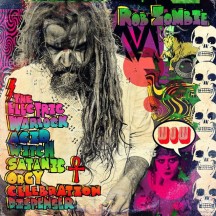 
01. The Last Of The Demons Defeated
02. Satanic Cyanide! The Killer Rocks On!
03. The Life And Times Of A Teenage Rock God
04. Well, Everybody's Fucking In A U.F.O.
05. A Hearse Overturns With The Coffin Bursting Open
06. The Hideous Exhibitions Of A Dedicated Gore Whore
07. Medication For The Melancholy
08. In The Age Of The Consecrated Vampire We All Get High
09. Super-Doom-Hex-Gloom Part One
10. In The Bone Pile
11. Get Your Boots On! That's The End Of Rock And Roll
12. Wurdalak

As becomes immediately apparent when you first try to stumble through that conceptual train wreck of an album title, Rob Zombie is the kind of artist who emblazons his personality so ubiquitously on his music that it becomes nearly impossible to separate his sound from his style. Hellbilly Deluxe is one of my favorite albums, and even if Rob has not come close to replicating that success, I love the concept of his style and recognize that Rob Zombie doing his Rob Zombie thing can be perfect - but only if he has the musical substance to back up his creepy, kitschy flair. The Electric Warlock Acid Witch Save Me From This Album Title indulges itself far too much while attempting to produce simple, easily-digestible songs that go nowhere and sound utterly unsubstantial.

The first song stomps out a monotonous rhythm over which Rob grunts the name of the album, setting the tone for the pieces to follow. Most of these songs lack real ideas, settling on one concept and reiterating it until coming to a quick and exhausted finish. The album's big single, "Well, Everybody's Fucking In A U.F.O.", consists mostly of Rob's horrible hillbilly impersonation twanging over the same chord for (mercifully) not quite three minutes; the attention-grabbing song completely lacks any tools to perform its task. While tracks like "The Hideous Exhibitions Of A Dedicated Gore Whore" or "In The Bone Pile" might make more of an impression if expounded upon, Rob seems to have given up writing this album halfway through. Rob spits out watered-down versions of his own clichés in a groovy, half-rapped grunt over plodding, unmelodic background pummeling, cutting away every minute to a distorted solo vocal or solo guitar track that completely interrupts the flow of the songs. Only "Wurdulak," the last track, actually breaks the three minute mark (at a respectable 5:31), but not to very great effect.

"Medication For The Melancholy" comes out of nowhere with a surprisingly intense, creepy, and cool grab-bag of riffs and sounds. It's definitely not Hellbilly Deluxe-tier, but could easily sit with The Sinister Urge; the following track, "In The Age Of The Consecrated Vampire We All Get High," also sits head-and-shoulders above the other tracks on the album, and if only Rob had stretched the song out for longer than two measly minutes and let it develop, perhaps it could have turned into something great. I do also appreciate that Rob at least tries to introduce more of his unconventional electronic elements than he did on the last few albums; he just needs to incorporate them more effectively to recapture what made him great.

The Electric Warlock Please Stop sounds sterile and lifeless, much too clean and safe for Rob's jungly, filthy crunch to manifest itself properly. This album lacks the proper environment for Rob's trademark atmosphere to develop, and the songs are written so half-heartedly and performed so unconvincingly that the album has no chance of standing on the musical merits alone. I feel as though I've experienced something unusual, but not as though I've gained anything from it.