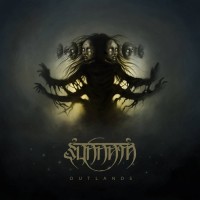 
As much as the bustling stoner/psychedelic rock underground consistently churns out new entertaining albums, a substantial portion of the music remains notably indebted to the desert rock bands of the 90's, as well as the hard rock of the late 60's and 70's. Sometimes it's a pleasure to encounter a band totally unafraid to take what they enjoy from those influences, and then go completely their own way, such as Sunnata do on Outlands.

Outlands is Sunnata's third record, but my first encounter with the group, and I've been enamoured with the distinctive sound they display here since my first listen. Outlands combines a blend of stoner metal and psychedelic rock with elements of doom, sludge, post-metal, oriental melodies, and more, to create an eerie, ritualistic, meditative vibe that at different points on the record either entrances or unnerves. After a minimalist droning introduction track, the first 'proper' song, "Lucid Dream", shows the untapped potential of combining the slow-burning, dynamic song structures and tribal drumming of post-metal, typically stylistically entwined with sludge, with the fuzzy guitar grooves of stoner rock, along with the Eastern-influenced instrumentation and eerie multi-layered vocals of psychedelic rock.

A 9-minute ritual of a song that gradually adds increasing instrumental intensity as the song grows and builds towards the inevitable gut-punching climactic riff, "Lucid Dream" effectively sets the tone for the rest of the music on display. Other choice cuts from the album include the spiritualistic title track, with its almost sitar-like guitar sounds and tom-heavy atmosphere-building drums, "The Ascender", which alternates between driving stoner rock and murkier territories, and the restrained, highly dynamic epic closer, "Hollow Kingdom".

As much as both the overall approach and the actual songs have got me fully on board with Sunnata, Outlands is naturally not without its flaws. The sonic variety on display here is impressive and enables the different songs to stand out from each other, yet I found the heavier, sludgier riffs to be much less enchanting than the eerie, semi-dissonant, atmospheric build-ups that dominate the musical landscapes of substantial portions of this album. Also, whilst the mid-tempo driving desert rock of "Gordian Knot" is perfectly satisfying, it does feel ever so slightly throwaway when sandwiched between two ambitious tracks such as "The Ascender" and "Hollow Kingdom". Lastly, I have no real explanation regarding why not, but for whatever reason I have yet to grow particularly fond of "Scars", which is a shame as it marginally disrupts the fantastic early momentum generated by "Lucid Dream".

I can't think of a clear comparison point for Outlands; Sunnata have clearly drawn upon an array of different influences, but in doing so have generated a sound entirely of their own. If you're looking for some music to guide you on a dark, hypnotic, yet at times uplifting spiritual journey, this album could well be travel partner for you.