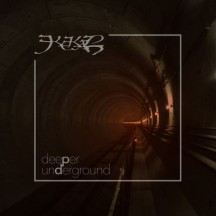 
Kekal is a weird band. For one, it doesn't have any official members, the music being made by anonymous contributors with no clear idea of how much the ex-members are involved. And then, while it is one of Kekal's most accessible albums, Deeper Underground is still a beast of its own.

Deeper Underground is one of those album whose lyrics and concept were written before the music itself. The booklet details Jeff Arwadi's immigration to Canada twelve years ago and the recent oil price crisis, which had him move again and start pondering greed, optimism, and spirituality. While in a way a more positive album than its predecessors, the lyrics reek of rage against the establishment, the wealth inequity, the opportunistic destruction of the planet, and religious sociopathy, but also of finding meaning through struggle even at your lowest points in life.

Listening through the album, you'll have a hard time deciphering the lyrics without the booklet or the Bandcamp page. Most of the time, the lyrics are sung through some hushed growls and even the cleans are sometimes passed through a vocoder. The cleans are at their easiest to make out when sung by guest vocalist Voxlucis in "Revealment". But while the vocal performance is moderately diverse, it still pales compared to the instrumentation. Kekal have over the years mastered the craft of blending extreme metal and electronics in such a seamless way that it feels natural for these two to belong together, from the programmed drums and the bleeps to the melodic riffs and the dreamy synths. Kekal manage to do that without sounding cinematic like Mechina or Neurotech. Thus, it's amazing to think that this is Kekal at their most restrained. Most of the songs tuned down the amalgamation of notes, giving certain sections a straightforward feel, with "Revealment" having an almost pop feel, despite still sitting in the weird side of the border.

Despite not being as out-there as Multilateral or many of their previous albums, Deeper Underground does not lose focus of what it tries to achieve. More concise both in length and in structure, but still twisted. Give it a shot.

Written on 02.06.2018 by
RaduP
Doesn't matter that much to me if you agree with me, as long as you checked the album out.
More reviews by RaduP ››