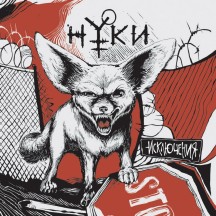 
After slaying her way into the semifinals of Russia's version of The Voice, Nookie returns to a more familiar musical sphere with Исключения (Exceptions), her most aggressive and electric solo effort to date.

Since her 2013 solo debut, which was a rather free-spirited pop/rock/indie album with no particular stylistic basis, Nookie has been diving back into metal territory, albeit from a different angle from what she became known for. Despite the heaviness of these tracks, there is little overlap with The SLoT. The SLoT's approach has typically been to write very catchy pop melodies and thunder over them with abrasive screams and nu/industrial crunch, but Nookie's solo material has a very jazzy, artistic vibe. Even as she screams her lungs out at the end of "Мыпростоесть" and barrels through "Продолжаем Движение," Nookie draws out the quirky subtleties that made Живы! such an unexpected turn.

I am glad that Nookie's music has gotten successively heavier over these three albums (at least partially because now I feel justified in adding her to Metal Storm), and even more so that that has not come at the cost of sacrificing inventive songwriting. Even if Исключения is not quite as conceptually adventurous as Живы!, the execution exceeds all expectations. Исключения's forceful alt metal sheen does not preclude the inclusion of the catchy hooks that wormed their way into my ears on the last two albums, as the title track, "Продолжаем Движение," and "Танцуй, Клоун, Танцуй" demonstrate. Nookie's performance is impassioned and fluid, simultaneously a charismatic presence from which the spirit of the album radiates and a mere part of the album's larger aesthetic, working in tandem with the rest of the band rather than overpowering it.

The guitar work on tracks like "Инь-Ян," "Before I Die," and "Космос" derives some texture and ingenuity from math rock; listening to ID's light fingers pounce all around this album, it occurs to me that he does not often engage in such technical exercises, and these are some of his most interesting performances. Many of these tracks fiddle with time signatures, unpredictable chord progressions, and uncharacteristic complexity, pulling musical ideas from punk, hip-hop, jazz, metal, and pop to create a bevy of memorable melodies with impressive musicianship bubbling under the surface. "Before I Die" is as much The White Stripes as Guano Apes, "Вверх" as much Cyaneed as nu metal.

I do wish that Исключения had some of the delicate acoustic or lightly backed pieces that appeared on Живы!, i.e. "Научи" or "Давай Помолчим," or perhaps something electronic-based like Пыльца Лунной Бабочки's "Колыбельная." Tracks like those are the furthest from what Nookie is already doing with The SLoT, and while it's her metallic shriek that made her one of my favorite singers, I enjoy being reminded that she can sing on a quieter and more personal level as well. Still, I can't say I'm disappointed with what may well be her strongest and most replayable album thus far.