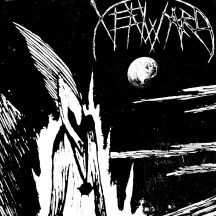 
Black metal has always had a strong inclination towards ritualism and the creation of alien atmospheres with its distinct sense of ambiance. But damn, does Xenward know how to nail the aesthetic well.

Music wise, both within metal and beyond, every year is destined to have a few "ninja albums," ones that seemingly just appear out of nowhere, but nonetheless inspire considerable awe from their sheer level of quality. In the past for me these have been albums like Hail Spirit Noir's debut in 2012, Remmirath's 2015 sophomore album, and for 2018 thus far I'd likely give this self titled effort from Xenward the distinction. A peculiar little one manner from Austin, Texas, Xenward delivers ambient black metal of an incredibly trancelike and borderline psychedelic variety, at times even feeling a bit doom influenced as well. Aggression is not the name of the game here as much as transcendence, surrealism, and hypnotism are. One listen to the powerful "Divided State" opener easily cements the impression.

With many bands labeled "ambient black metal," one can often pick up very clearly where the line between the black metal and the more atmospheric elements of the music is drawn, but this is simply not the case with Xenward, and the fact that it isn't comes as a welcome and considerably fresh change up for the style. On this album the black metal and ambient sides of the formula often find themselves merging at such a level that at many points they're virtually indecipherable from each other. The magnificent "Lodge Upon The Hill" is perhaps the best example of this, featuring a riffing pattern lurking in the background that is undeniably characteristic of the black metal style, but that has been slowed down and repeated to the extent that it also serves to create a noticeably droney, dark ambient mood as well. This technique as well as others really reinforces the sophisticated genre fusion going on with this album and is nothing if not demonstrative of excellent songwriting abilities.

While one can at times pick up traces of other black metal bands that flirt with dark ambiance and psychedelic approaches on Xenward, particularly the work of Mories, Leviathan, and the BTC bands, it's still quite difficult to really compare the music here to any other band. The feeling that it's both similar to others out there as well as incredibly different is refreshing and brings a sense of admiration, for it shows Xenward's ability to learn from other bands without aping them entirely. Eerie, spine tingling, and without question one of the overlooked black metal gems from this year, Xenward is an album for those who need that itch for the ominous alien music scratched.

Written on 09.09.2018 by
Apothecary
Comforting the disturbed and disturbing the comfortable since 2013.
More reviews by Apothecary ››