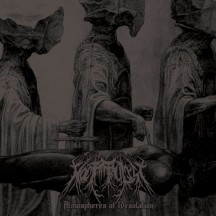 
Two things to know about Noctambulist and their debut:
1. They really really like Ulcerate;
2. I've heard EPs longer than this album.

Now that I've said everything that needs to be said about this album, let me try to somehow stretch it out into a few paragraphs and give you an actual opinion along with it. Let's talk about the band first. Noctambulist come from Denver, Colorado and were formed in 2016 and they have a track on Bandcamp from 2017 that could be either a single or a demo, depending on whom you ask. Now they've released Atmosphere Of Desolation through Blood Harvest, which could be either a full-length or an EP, depending on whom you ask.

With five tracks (six with the intro) and all of them with roughly five minutes of run time, you could play Atmospheres Of Desolation twice in the time it takes to listen to an album by their most obvious influence, and, if you read my attention-grabbing intro, you know who I'm talking about. So this release feels more like a short burst of intense destruction rather than a full agonizing experience. And while it's only a few minutes away from being half an hour, I feel like it would have benefited from an extra song, perhaps a reworked version of that 2017 one, which would've made Atmospheres Of Desolation feel like a more complete experience rather than one that just suddenly ends when you're expecting more.

But for its short run time, the album does manage to achieve the atmospheres that it boasts about in the title. The music is incredibly technical and intricate in a very nauseating way. You probably don't even need me to tell you that it's extremely dissonant. But it's extremely well-performed dissonant music. The vocals can move from those usual deep growls to some agonizing screams as well, the riffs can bend to whatever shape needed, the cymbal-heavy drum performance is delirious, and the bass is not drowned that much in the mess, though I wish it was given a few more moments to shine.

So while performance-wise, this is amazing, songwriting-wise it mostly showcases a band that has enormous potential and can write a strong debut, but that promises that it can be done better, which I hope that future releases will prove to be write. They just need a bit more ambition.

Written on 27.01.2019 by
RaduP
Doesn't matter that much to me if you agree with me, as long as you checked the album out.
More reviews by RaduP ››