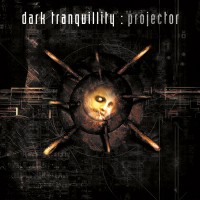 
If some of you are die hard fans of the times when Dark Tranquillity used to play real death metal, then you don's have to read further, because this album is the more likely to disturb you. Some would call them sellouts, would cry for the nostalgy of the fast riffs and the flow of violence that you could find on Skydancer or on The Gallery, or even insult them because of the clean vocals and the piano parts, but for myself I think I'm going to talk about evolution and about the courage of a band that has not been afraid to lose a part of their fans just to explore a new side of the metal spectrum... This is an artistic move, that even if it cannot be understood by all, at least it has to be respected.

Let's talk about the album itself: after the melodic death metal albums of the beginning, Dark Tranquillity has decided to keep only some elements of this style that lots of people love, and to add more progressive elements with a kind of new gothic/Paradise Lost attitude. The first track of the album, ?Freecard?, starts with a melodic and sad intro on piano, before blowing everything with a riff that can remind of the ?good old times?. Mikael Stanne still uses harsh growlings most of the time, but the difference is that on a huge part of the choruses he shows the vocal abilities of which we had had a glimpse on some tracks from ?Skydancer? and on ?Punish my heaven? taken from their masterpiece ?The Gallery?. And the least we can say is that the man really has a beautiful and so powerful voice that could compete with a lot of gothic and power metal singers. The second track was also the first single, ?Therein?. It has almost the same construction as ?Freecard?, with still this quiet but catchy chorus, that makes of it one of the most relevant songs of this album. Then comes ?Undo Control?, with the first surprise as the vocals are equally shared between Stanne and beautiful female vocals. But still, those who say they have turned into commercial and mellow crap can come back to Manowar, because even if what you notice first are the gothic passages, the riffs still remain fast and furious, not so far from the prrevious albums. The first track that does not confirm the violent beginning of the album is the beautiful power ballad ?Auctioned?, which is above all a pretext for Mikael Stanne to show the splendor of his voice. On this song, you realize that the greatest care has been exercised in the choruses, that still remain on the edge between commercial and really metal. Then back to the tune of the first two songs with ?To a bitter halt? and ?The sun fired blanks?, one of the best tracks of the cd, that release the fury after the previous timeout with pure melodic death riffs and usual screams. ?Nether Novas? is also a good song, maybe a little behind some others, and then come the most surprising track of the album: ?Day to end? is also a ballad, except that this time it is absolutely not metal, but it's more something like alternative industrial music a bit in the style of Nine Inch Nails. Anyway, it's a very good one, that gives a moment to rest. To rest before the crazy end of this album, that blows out your brain with the unleashed anger of ?Dobermann? and ?On your time?.

You probably have already understood that I like this album very much... That's right, I?ve not felt any disappointment when I?ve heard it, maybe because the new vocals and the piano parts bring a change not only in the music, but also in the general mood of the band: I mean, when you listen to Projector, you can feel that behind the aggressivity, behind the violence inherent to this proper style, it is dripping of melancholy and sadness, two new feelings in the heart of our five Swedes... No regrets!