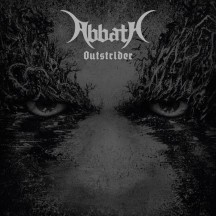 
Black metal's favourite source of memes iconic figure Olve Eikemo, better known as Abbath Doom Occulta, is back with the second album of his project Abbath, in an effort to make this European summer's heat wave a little more bearable.

With a completely different line-up, after Creature's uncelebrated exit and King Ov Hell's decision that Jung is not kvlt enough, Abbath is now a four-piece, yet the band unmistakeably fulfils the vision of the man on the cover.

Outstrider is not a pure black metal album; in fact, the song that is closest to black metal is the cover of Bathory's "Pace Till Death". Musically, the record sits between Abbath's debut and Eikemo's older project, I, so this should be good news for those who enjoyed the latter's brilliant and, sadly, only release. However, Outstrider is not the same affair compared to those two albums because it has neither the aggression of Abbath nor the Motörhead-ism of Between Two Worlds; at least not to the same extent. I would describe it as an icy, blackened heavy metal record with an air of epic majesty and some rocking grooves.

Well-constructed riffs, driving rhythms and blazing solos accompany Abbath's trademark croak of a frog that is being strangled and he has also discovered this new Lemmy-meets-Popeye 'mwooaaah' vocalization that is first heard in "Bridge Of Spasms" and is repeated just before the best riff of the album in "Scythewinder". The overall sound of Outstrider is bigger than it was in the band's debut, with a stronger bass presence and a bit more melody from the guitars. The black metal element is not entirely washed away of course, and the frequent double bass frenzy makes sure of that, but it is with songs like "Calm In Ire (Of Hurricane)", "Harvest Pyre" and the title track that you get the spinal tingling sensation of a pure infectious anthem.

With Outstrider Abbath demonstrates once again what a great character he is for black metal, giving the genre a rock 'n' roll vibe that makes it catchy and easy to get into. He has said himself that "Black metal, to me, is rock 'n' roll. It's Venom in 1982". Indeed, this album is recalling some of that past glory, which gives a good enough justification for its appeal.

"We seek the gods concealed
Within the wounds never healed"