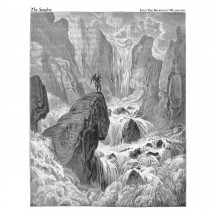 
01. Death In Black Cathedrals
02. A Storm Of Black Poetry
03. Into The Beckoning Wilderness
04. The Mother Of Sin And Ruin
05. The Pallbearer's Hymn
06. Until The Withered Return From The Dark


Sometimes you have to go back in time in order to experiment.

For roughly two decades(!) Mories has released some of the most haunting and unique extreme music I've ever heard. His many, MANY projects (Seriously dude, calm down! We don't even have all of them in our database…) are quite different from each other for the most part but they all share a common, trademark sound that makes it clear you are listening to a work of his. It can be the distinct drum machine, the otherworldly production around the riffs and melodies or simply the monstrous growls and shrieks. I've listened and reviewed a decent number of his main projects throughout the years. Just when I think I have him all figured out, he throws a curveball with a sound I have not heard in quite a while.

Back when I was younger and just starting to get into extreme metal, the so-called 'Peaceville Three' of death/doom metal played a key role in my musical journey. It's a sound I hold close to my heart. Listening to Mories paying homage to this particular period of time truly captivates me and fills me with nostalgia. The heart-wrenching violin in the beginning already sounds like classic My Dying Bride but the brutal passages evoke the lurking mysticism of Disembowelment. Another beautiful reference is the usage of clean vocals and bright, triumphant yet deeply moving riffs and leads. This can be felt in tracks like "A Storm Of Black Poetry" and the title track, which feel really close to some of Anathema's best moments from their early years.

Do not think this is a carbon copy of that particular type of doom metal though! With Mories everything is a little bit different. The odd touch provided by the drum machine along with his trademark fuzzy production makes the overall result sound blurry, alien and dream-like. The middle section of "The Mother Of Sin And Ruin" sounds so bizarre to me that I can't properly express if it sounds blissful or nightmarish. "The Pallbearer's Hymn" is also a track that truly showcases Mories' masterful layering of different sounds with the most sorrowful and melodic riffs I've heard from him in years, along with complex beats.

For yours truly, the biggest highlight of this album is the beautifully well-crafted riffs. It is such a refreshing surprise to listen to this type of melodies from a musician that tends to go for a chaotic wall of sound, even in his "lighter" projects like Seirom and Golden Ashes. The fact that he chose a genre that has such a deep significance to my younger self certainly affects the way I view this album. With The Sombre, Mories confirms once again that he is a musical chameleon capable of taking even the most well-known type of metal and making it his very own.

Only 50 copies of this CDr are available so hurry up and enjoy the beautiful misery!