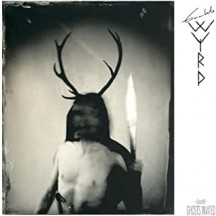 
The path from Gorgoroth to Gaahls Wyrd is a long and tumultuous one, grandiose and dramatic in scale as if written for TV. Rather than dusting off old skeletons, however, let's instead gather some fresh corpses to bury in our collective closet.

Gastir - Ghosts Invited bestows its audience with an immediate change in overall sound, gently drifting away from the icy shores of the frostbitten black metal realm whence it came without ever truly deviating from its dark, atmospheric origins. With a carefully designed emphasis on incorporating seemingly as many melodic riffs into each song as possible, this comes across as more of a hypothetical "what if the musicians from Insomnium formed a black metal side project" kind of album than a Gorgoroth 3.0 release. That alone is enough to dissuade whatever's left of Gaahl's diehard fanbase, but for anyone still hanging on to this cursed vessel who's been awaiting a release that will restore their faith in this old man's vision, this is it.

A decisively ambitious and sophisticated work, Ghosts engages the listener with a more philosophical vibe, something to be digested while looking for artistic inspiration or a backing soundtrack for a round of late-night contemplation with a bottle of wine (hello). Its several soft-spoken, dreamy interludes and middling pace overwhelm the more direct, aggressive moments, resulting in a bite with incredibly dull teeth, but with teeth nonetheless. Perhaps this calmer, less extreme direction is a sign of aging or maturing as musicians. Perhaps it's simply the concept of a man with a desire to create thoughtful, tamer music. As has been made publicly known, Gaahl's passion for metal has been exposed as lacking to the point of a retirement announcement, so it shouldn't come as too much of a surprise listening to these occult chants, quiet breakdowns, and energetic clean vocals mingling with a general sense of ease that will quite honestly leave the true crusaders feeling incredibly -- awkwardly -- out of place.

This is a challenging album in the sense that it's not so simple to understand what its target audience is. Gorgoroth fans won't be pleased by the tonal shift and smoother production quality even though the foundation remains fairly unchanged; black metal fans won't be pleased by the generic melody-heavy approach even though all the staples of the genre are intact; and first-time listeners won't have any nostalgic benefit of listening to an album under the Gorgoroth moniker. This ouroboros triangle will only end up consuming itself along with any new material Gaahl and co. produce, leaving behind scathing remarks, surface-level critiques, and with anyone's luck, a burned-down church or two.