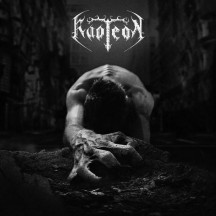 
With history more interesting than most bands out there and with two full-lengths under their belt, Kaoteon present us their third, self-titled album.

The band's core is the Lebanese duo of Anthony Kaoteon who composes the songs and plays guitar and Walid Wolflust who sings and writes the lyrics. The music of Kaoteon is the artistic expression of someone who grew up in war-stricken Beirut, has seen death from very close and survived. Legend says that in their early days, when they were still called Chaotaeon, they were arrested while performing in a local club and were held captive and under investigation for days, as suspects of promoting Satanism. Both band members have been living in the Netherlands for some time now and are supposedly safe from this type of police raids.

Despite Kaoteon being a relatively obscure act that is self-releasing its albums, they have managed to enlist for a second time the super-talented bass player Linus Klausenitzer (Obscura, Alkaloid), while iconic drummer Adrian Erlandsson (At The Gates, The Haunted, ex-Paradise Lost, ex-Cradle Of Filth, etc) is the other high-profile studio musician. Not bad for a rhythm section, huh?

Kaoteon's debut was a total manifestation of post-adolescent anger, while Damnatio Mamoriae that followed seven whole years later was a lot more mature sound-wise, songwriting-wise, and performance-wise. In fact, it was one of the greatest extreme metal records of 2018, even though their blackened death metal idiom was noticeably very reminiscent of Behemoth. With Kaoteon, the band expands on the sound of its predecessor and actually catches the listener who is familiar with their previous work a bit off-guard.

What has always been great about Kaoteon is the fact that even though Anthony's riffs are mainly aggressive, fast and hard-hitting, he always manages to squeeze in little melodic touches that make the assault more bearable (and interesting). The first two tracks are showcasing this feature very convincingly, in a way that you get the feeling of being chased by rabid wolves but when they do catch you they start licking your hands instead of ripping your flesh apart. At the same time, the variety of the supremely performed vocals, which range from high-pitched black metal shrieks and venomous death metal growls to borderline hardcore screams, is another element that makes Kaoteon's music more appealing than your average black/death band. You can hear all that and more on "Broken", which is my favourite because it's loaded with punk attitude and awesome groove.

When coming across Lebanese metal, it's natural to expect some oriental nuance. The band's Middle Eastern origin can mainly be heard on the lead guitars of "Memento Mori" and the album closer "Acheronta Movebo". This last one along with "Catharsis In Unison" are the two tracks I didn't expect, because I hadn't heard Kaoteon trying their hands on doom/death before. And they do it remarkably well. The epic melodic death "Gardens Of Midas", which is sandwiched between them is not very typical of the band's style either.

I thought that Anthony had scratched his 'everything but the kitchen sink' itch in terms of the number of styles he can play in one album with his other project, Death Tribe; I was wrong. However, unlike Death Tribe's debut of last year, Kaoteon is not a music salad. It's not the most cohesive record ever made, but the track order is such that makes the transition from one style to another smoother. And, even though you may get a feeling of listening to two EPs that were joined together to become one LP, the songs themselves range from being very good to excellent.

I feel that Kaoteon is less violent and more death- than black-leaning compared to Damnatio Memoriae. I've only had it for about three weeks and the more I listen to it, the more it grows on me and in my opinion the songwriting has improved. The added variety makes it sound like another step forward for a band that has been constantly progressing and, as far as extreme metal goes, these guys definitely deserve your attention.