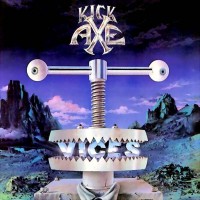 
The cover art speaks volumes. Canada's Kick Axe are a band not to be taken seriously; while no slouches as musicians, they are as good at getting you to raise your devil horns as they are raising a smile on your face. Vices is an album that you should put on if you are looking to have a laugh while hearing some great guitar playing; this is not Steel Panther tryhard forced humour, but more William Shatner doing metal covers funny.

Starting off with a stubbed toe scream to rival them all, "Heavy Metal Shuffle" introduces you to the band's blend of bluesy metal riffs with glam delivery that is fun and dances just on the right side of cheesy; it's enjoyable, but will have you smirking at points in a good way. The band do take their cue from Kiss in being able to play their way out of parody and into being taken seriously, though when the band falter, their playing skills can't rescue them.

The acoustic segway from "Stay On Top" into "Dreamin' About You" is a nice touch, giving the obligatory power ballad (this was the 80s, remember) an organic feel rather than it breaking the flow of the album. There is something about it that endears itself to you; like watching Bambi on ice, you cannot help but find it doofy fun.

Larry Gillstrom and Ray Harvey gel well as a guitar duo and help give the band its identity; the blues licks and solos on "On The Road To Rock" sound like ZZ Top and appear out of nowhere in between straight-up rock verses, giving you an idea of what they can produce. Criston's vocals are strong and versatile, but at times do jump the shark and will make you laugh (in a good way though). Brian Gillstrom and Victor Langen hold down the rhythm well and sit comfortably between the back and foreground throughout.

Where Vices falters is when the band lose the balance they hold and verge too far into cheesiness. "Alive And Kickin'" is good instrumentally, but the lyrics and vocal delivery will have you laughing into your hands throughout; their urging of you to "Break the law, and commit a crime" is like being told by Alvin and the Chipmunks to revolt against society. "Just Passin' Through" is built to end a concert and be a triumphant call to the audience that they will return; it comes off as a polite reminder that they will one day pass through again.

If you are looking for a fun album of metal that does not take itself too seriously, you could do far worse than Vices. Kick Axe produce a slab of blues/glam metal that is enjoyable and worth a spin if only for curiosity's sake, though be warned; if you are caught doing the "Heavy Metal Shuffle", it will be damned hard not to laugh.