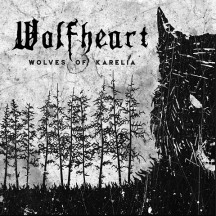 
Winter. Bare. Snow. White. Cold. Yet dark, forlorn, brutal, unforgiving. Melancholy, war, death, hope, sadness, more hope, more death. A wolf. No, a pack of them. Wolves. The Wolves of Karelia. Defenders of the northern realm. Fighting the invaders. Coming for you, coming for us all.

Is Tuomas Saukkonen ever back with a bang in 2020! After the revival of the Dawn Of Solace project, which dropped the excellent album called Waves, his main outlet unleashed one masterful release. With consistency as the key to their sound, Wolfheart is slowly building their legacy with Wolves of Karelia. Nothing extravagant here, just perfectly executed melodic death metal stripped bare to the fundamentals, yet augmented in a tasteful manner.

The formula hasn't exactly evolved over the years, but it has grown album after album to become one of the most recognizable sounds in the field. Wolfheart have long established themselves as a prime outfit from Finland. As a matter of fact, the whole thing can be seen as a more in-depth and comprehensive exploration of the song "Ghost of Karelia" from Winterborn.

Songs such as "Horizon on Fire", "The Reaper", "The Hammer" or "Born from Fire" will continue to solidify that status with their uncomplicated punch, blatant energy and overall head-banging inducing structures.

By bringing session guitarist Vagelis Karzis - of Rotting Christ fame - into the fold, Wolfheart have found the perfect complement to Tuomas. Besides that, the core of the band remains unchanged with Joonas Kauppinen banging the drums expertly and Lauri Silvonen plucking that bass with flair and scary efficiency. And, of course, Tuomas as the front man, kick-ass guitar player and growler-in-chief.

Wolves of Karelia is a joyride of aggression and intention. Eight tracks for 41 minutes of blast-packed music revolving around that historic war of 1939 fought in the remote lands between Russia and Finland. Despite all that, the occasional undertone of positive light can be found in Tuomas writing, which is not unlike the classical music of Jean Sibelius that helped shaped Finland's national identity. Obviously, Sibelius "Karelia Suite" comes to mind.

As the black-and-white album design suggests, Wolves of Karelia is a bare-bone, direct-hit-to-the-face kind of record. Devoid of niceties but full of dark melodies, strength, violence and beauty all at once. Tight rhythms and darkened themes coupled with haunting vocals turn one of the most anticipated albums of the year into a solid as granite monolith of melodic death metal.

Written on 26.04.2020 by
Dream Taster
Bringing you reviews of quality music and interesting questions such as: