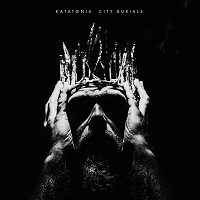 
When I first heard the first single from City Burials, "Lacquer", I actually hoped, no matter how absurd that would be, that the rest of the album would be in that vein. That didn't happen. But surprise, the album is still pretty good.

I really liked Katatonia so much that they used to be in my top 5 bands of all time at one point. A lot of people stopped liking them after Brave Murder Day. A lot more people stopped liking them after The Great Cold Distance. But at the same time I've seen people claim that The Fall Of Hearts is their favorite. Regardless, I'd be hard pressed to find a Katatonia album I didn't like, only ones I revisit less often. But also, I generally don't revisit Katatonia albums, not because I don't like Katatonia, but because I've always just stuck to a few favorites from each record. I saw Katatonia live three times, and my favorite time was the first one, in which they played a career-spanning (except the first two albums obviously and sadly) set. In the following two they played either a The Great Cold Distance or a Night Is The New Day set. And as fun as it was to hear a bunch of songs that barely get played live finally get that treatment again, I still would've preferred to hear some other songs. Plus I bet these folks, if they're gonna tour again, they'd rather do a Dead End Kings anniversary tour than a Brave Murder Day one. I'm gonna keep my derogatory opinion about that to myself.

What Katatonia albums do have for themselves though is that Katatonia is an extremely consistent band. Even if I was kinda bored during those two full album sets, I stuck around. Not just because, well, what else was I gonna do, but because what they were playing felt boring compared to what they could've been playing. Even through some of the filler, I still found Katatonia to be always at least enjoyable. Plus even if after 1998 all of their albums have had a core Katatonia sound, each album has done just enough different to be a distinct experience from all other Katatonia albums. So, obviously, City Burials is no exception. But at this point, and after a hiatus of sorts (in which you know damn well I hoped Nyström would revive Diabolical Masquerade), I was kind of hoping that they would either pursue the progressive leanings of The Fall Of Hearts, or go either further from or closer to metal. Instead, City Lights feels like kind of a middle-of-the-road album. But, like those full album sets, you still stick around.

I probably listened to this one pre-review the most out of all albums I reviewed this year. I have seen a lot of people complain that it still doesn't click with them even after many listens, or that it's not memorable. And it's baffling to me, everything about this album screams memorability and engagement the same way that Katatonia always delivered. And yet, even at my God-knows-how-many listen so far, I still find songs that don't yet feel familiar. So I can guess why people feel that way about the album. Honestly, I don't mind this as much as I thought I would. I obviously loved "Lacquer" on first listen and so far it's still my favorite on the record. I'm starting to finally get the choruses of "City Glaciers" and "Flicker", I love the guest vocals on "Vanishers" even though I admittedly have no idea who Anni Bernhard is, and that "fuck" is "The Winter Of Our Passing" does bring back a bit of Viva Emptiness.

I find myself both wishing I connected to it more, so I could rate it higher, and connecting to it less, so that I could at least claim that they lost it. But each listen is such a blast. It feels like such a lush and elegant album at times that I can't help but still be entranced. The production is amazing, Jonas' voice still sounds amazing (though I can't say the same for the last live performance that I witnessed), the compositions don't feel boring. I did realize something upon having to relisten to this album for the purpose of this review. I wasn't bored with it. I still wouldn't prefer a full performance of it, but I wouldn't mind one either. I would prefer that Katatonia would go in either one of the directions that I mentioned, but I don't mind this either. I would prefer that they finally do a studio version of this. Actually, I do mind that they didn't do that yet. So if they do that, and they finally do the Brave Murder Day anniversary tour with Mikael and all that, they'll be back in my full good graces, as if that keeps them from sleeping at night.

Written on 02.05.2020 by
RaduP
Doesn't matter that much to me if you agree with me, as long as you checked the album out.
More reviews by RaduP ››