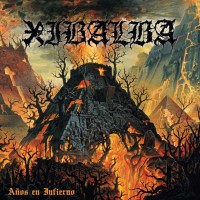 
Xibalba gained some notoriety for realizing that you could blend hardcore and Swedish tinged death metal. They always knew you could sprinkle some doom as well, but this feels like Professor Utonium accidentally spilling "Chemical X" into the cauldron, but it's five huge guys spilling doom.

Now OSDM has had a revival. Hearing hardcore-infused riffs with buzzsaw tones isn't really as fresh as it was even five years ago, when Xibalba's previous record, Tierra Y Libertad, came out. Even when the band barely came out, it wasn't like hardcore and death metal were never blended before, or that it wasn't obvious the scene would become stale at one point. But Xibalba were always ahead of the curve with just enough interesting things about them to keep them unique. Like I said: doom. Not just the Mayan end-of-the-world doom, but actual doom metal. Specifically, funeral doom. Hardcore funeral death doom, to be extremely precise.

Now it isn't like Xibalba have just pulled some doom sounds out of the void. Even as far back as their debut, there were enough tinges of doom to create a precedent. The crushing production always had a somewhat drone-like suffocating feel to it. Tierra Y Libertad's closer, "El Vacio", was the most left-field thing the band has ever done in terms of doom and post influences. Guitarist Brian Ortiz (aka Bigg O))) )'s side projects Mortuary Punishment and Tzompantli both came out with releases further delving into doom drenched death metal. So now Años En Infierno feels like the natural path that Xibalba would take. It also feels like what it describes, years in inferno.

So if hardcore death metal isn't really something that's that original anymore, I have yet to hear any band integrate funeral doom and hardcore to this degree. The two are still somewhat separate here, as obviously there are slower sections and longer sections, but it doesn't feel like Xibalba are forcefully moving from one to the other. It just feels like the crushing anger is displayed in two sides of the same coin. And especially when the band is doing the newer part of their sound with just as much passion and ambition as the usual side, it feels even more natural. Add to it that this album probably has the best production that a Xibalba album has ever had, and you have a hardcore album that makes you feel the misery.

But it isn't misery that makes you lay and weep. This album feels like the embodiment of "What doesn't kill you makes you stronger". Yet the misery it oozes cannot be denied. The tones are more mournful, the whole thing does feel like a dirge at times, and the closing tracks are probably the most somber and serene that the band has ever put to record, quite in the vein of the closer of the previous record, but amping the feeling even further. And even with all this ominous infusion, a Xibalba album is a Xibalba album. The riffs are massive, the band sounds like they would wait for you around the corner if you crossed them wrongly, and it makes you instinctively clench your fists. So it's really the best of both worlds.

It really seems like Bigg O)))'s dabbles in doom on his projects has paid off, and while I might be giving him too much credit for the band's new sound, it's clear that it is indeed a winning formula. As long as they don't forget to make their music feel like the sonic equivalent of a sledgehammer.

Written on 26.05.2020 by
RaduP
Doesn't matter that much to me if you agree with me, as long as you checked the album out.
More reviews by RaduP ››