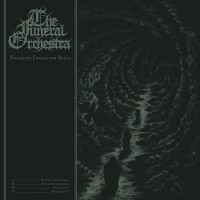 Output from The Funeral Orchestra was really sparse in their almost twenty year long career. 2003's Feeding The Abyss is somewhat of a cult classic that came after a couple of demos. Afterwards the band couldn't properly follow it up, as it seems they felt that whatever they were doing couldn't live up to it. A couple of splits and EPs later, it seems that they've changed their mind, and that the time is right. 2020 brought not one, not two, not even three, but four The Funeral Orchestra releases, and three of them are over the half hour mark, so we're getting extra spoiled. First it was Vomit Desolation, a single release of a track from a recent VA compilation, then it was Apocalyptic Plague Ritual MMXX, which featured re-recorded versions of various previously released songs, then it was the Negative Evocations EP, whose title track was taken from this upcoming album, but that also had two original songs. But all of it led to this. Negative Evocation Rites is what it was all building up to.

Consisting of an anonymous array of musicians, in this incarnation a trio, centered around Leif Nicklas Rudolfsson of Sacramentum and Runemagick fame, The Funeral Orchestra self-describes its mission to "create a form of heavy, minimalist and obscure doom music". And that Negative Evocation Rites is precisely. I have listened to my fair share of funeral doom, and I do have my gripes with it, often with it being too long for its own good, and not being able to fill that runtime with anything too moving. Negative Evocation Rites is barely over 40 minutes in runtime, so it instead feels like the other way around, where I wish they had added those two songs from the Negative Evocations EP as well, since it also feels like the album's ending would lead to something instead of suddenly stopping. But the more manageable runtime makes each percussion hit and each riff feel that much more important. And funeral doom isn't all about runtimes, otherwise I wouldn't love Elysian Blaze's Blood Geometry as much. It's about how it sounds.

Negative Evocation Rites doesn't sound polished, or pretty, or crushing. In some ways, it feels like the overly lo-fi production is somewhat taking away from the impact some of these sounds might have, but it reminds me so much of most early funeral doom, which instead makes me have a 180 and completely appreciate the appeal. The sound is cold and suffocating, but contained. And yet I feel it in my bones when I listen to it. The riffs don't sound as massive as they are, but they feel that massive. Each hit of the percussion contains more than can be heard. It's more gigantic than meets the eye. Or rather the ear. It's like the sound is beyond comprehension and mere human tools of recording. That may be giving it too much credit, but as I said, I can excuse a funeral doom album taking its sweet time or not being that interesting songwriting-wise, as long as the sound of it is convincing. And I am convinced.

Now this isn't to say that there isn't some surprisingly good songwriting at play here, just that the slow pace and there basically being very few notes, it's harder to notice. And it's hard to pay attention to it, when the guitars and percussion sound so unusual at times. The main vocals I'd say are the ones that feel most conventional, edging on a black metal approach, but even those fit this sound perfectly. And especially when they are replaced by ominous choirs. And the moments when the percussion is jagged, the guitars and the choirs build blood curdling atmosphere, and the vocals spew quietly, those remind me of why this damn genre is that well regarded in the first place. I sometimes wish that the percussion was more jagged, the sound more punishing and lo-fi, the vocals even more ghastly. But I can't deny how creative this album is in achieving that ghastly feeling.

So indeed, this isn't just a worthy follow-up to Feeding The Abyss, or a successful release from all the buildup of previous releases, but one that should remind people just how great funeral doom can be.

Written on 30.05.2020 by
RaduP
Doesn't matter that much to me if you agree with me, as long as you checked the album out.
More reviews by RaduP ››