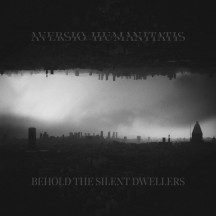 
01. The Weaver Of Tendons
02. The Presence In The Mist
03. The Sculptor Of Thoughts
04. The Wanderer Of Abstract Paths
05. The Watcher In The Walls
06. The Scribe Of Dust


For my money, Schammasch and Regarde Les Hommes Tomber released two of the best black metal albums in the past 12 months. As such, it's unsurprising that an album that shares elements of both bands' sounds similarly pleases me.

I'd say the resemblance is arguably closer to Schammasch; just listen to the opening track "The Weaver Of Tendons" and work your way to the 3-minute mark, when it moves into a mid-tempo groove that could easily have slipped onto Triangle by the Swiss band completely unnoticed, helped by the atmospheric guitar leads and hoarse vocals. Behold The Silent Dwellers, the second full-length by Spaniards Aversio Humanitatis, is not a 'blast for victory' aural assault of a black metal record, but a densely atmospheric, malevolent beast, able to effortlessly shift between slower, insidious crawls and faster, more suffocating periods to maximize the hellish nature of their sound. By taking strengths from several accomplished bands in the current black metal underground and combining them, they've made a killer record to announce themselves as a name worthy of attention in their own right.

As already mentioned, probably the most prominent aspect of Aversio Humanitatis's sound is the kind of thick atmospheric onslaught that Schammasch typically conjure, most prominently from the tone of the guitar riffs, but also the percussion that goes with it. However, they don't typically extend to the ritualistic aspects of Schammasch's sound, more their general riffing approach. They don't completely shy away from the ritualistic side, but they only come in rare moments, such as the later moments of "The Wanderer Of Abstract Paths", in which group semi-chanting appears for what I think is the only time on the record. Otherwise, the vocals here are the type of low-end hoarse roar that has become increasingly prominent in black metal in recent years, and which helps add to the infernal tone of the record.

I've mentioned the clear resemblances with Schammasch, but there are several other reference points one could use for different aspects of their sound, including Regarde Les Hommes Tomber, whose fiery post-black sound is mirrored in the "The Sculptor Of Thoughts". This track features many of the slick transitions in drum patterns and guitar density that help the French band generate such intense atmospheres, whether blasting, pounding, or layering on thick tom patterns. The serene interweaving of high-pitched tremolo towards the end of this song is also pulled off with aplomb, demonstrating Aversio Humanitatis's acumen for using the right approach for the right moment.

As impressive as their ability to channel these other groups to such great effect is, it's also nice to hear moments where Aversio Humanitatis bring in other elements to allow themselves to distinguish their sound from their (presumed) influences. These occur more towards the end of Behold The Silent Dwellers, such as on "The Watcher In The Walls", where some of the higher-pitched guitar work later on takes perhaps a slightly more metalgaze approach, or a more melodically atmospheric one at least. There's also interesting turns in "The Scribe Of Dust", which opens with a more classic-sounding black metal riff and features an In Mourning-style mid-tempo melodeath riff, as well as a groove in the second half that owes more to the Norwegian sound than the French scene that inspired much of the record. These moments are relatively minor when looking at the record as a whole, but they help to flesh out an already thoroughly accomplished base.

With a black metal scene as overpopulated as the one in 2020, it takes a lot for a band to truly stand out. Delivering a record as reliably exhilarating and consummately curated as Behold The Silent Dwellers is exactly the kind of early-career statement Aversio Humanitatis need to stand a chance of establishing themselves as a major name, but should they continue to produce music of this quality, the number of heads turned in their direction will only continue to grow.

Written on 19.07.2020 by
musclassia
Hey chief let's talk why not
More reviews by musclassia ››