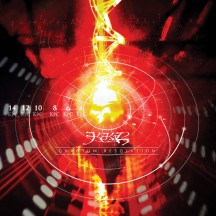 
Indonesia's Kekal has been around for about 25 years, and I still can't really figure out what their deal is.

I reviewed their previous album, Deeper Underground, and I called it their most accessible album. Now that Quantum Resolution is blasting me with all this bass-boosted trap, I might be tempted to call it as such instead, but that would still be just comparing Kekal with Kekal. Comparing Kekal with pretty much everything else is weird, in the sense that they manage to make music that should be pretty conventional, at least at times, but it feels so twisted and eerie that it's as if it doesn't come from the same framework as most other music.

Quantum Resolution comes in a pretty great year for avant-garde metal music, from complete newcomers to the stars of the moment to household names. By definition, avant-garde music should be forward thinking and experimental, so logic dictates that an avant-garde band's music should eventually become conventional as their innovations start becoming more and more integrated within the conventional. And maybe that's what makes Kekal's music so weird. Making weird avant-garde music for so long, parts of it feel conventional: like some riffs, some of its dissonance, or some electronic infusions. But all of these elements are still caught between the two worlds, not really cutting edge anymore, but not really commonplace either. But it's not like Kekal is stagnant with its craft either.

One of the things that I immediately noticed about Quantum Resolution is the bits of bass boosted trap that feel so out of place, especially when paired with the vocals, and especially coming off the heels of the best blend of trap and metal I've heard. But maybe I'm not supposed to feel comfortable with how it's integrated. Dissonance has now became so commonplace in metal that hearing it is nothing new, so something like this album still managing to make it sound uncanny is a real wonder. And sticking true to the stereotype of avant-garde metal sounding pretty much like "circus metal", the music constantly throws new musical elements at the listener be even more disorienting, through I can never say that it just wants to see what sticks.

At this point I'm not sure if I would want Kekal's music to be more coherent, maybe I would want some of its outside elements to be better integrated, but at the same time I feel like that would make it lose some of its appeal. Even though they claim this to be the most lyrically significant Kekal album, being based on the Gnosis of our spiritual insight as humanity becoming aware of its situation, but talking purely from a musical point, it often feels like an album that doesn't make sense. No matter how much the riffs and the shrieks and the progressive metal moments feel so close to sounding like what you could hear from any other band. So close, yet so far, because no other band except for Kekal can thread so close without losing its alien feel.

Continuing to be metal scene's best kept avant-garde secret a few decades later, Kekal are still confusing and disorienting, and, if I may, completely awesome.

Written on 02.08.2020 by
RaduP
Doesn't matter that much to me if you agree with me, as long as you checked the album out.
More reviews by RaduP ››