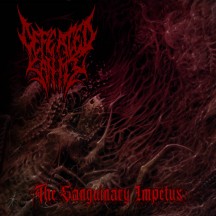 
What would it sound like if Frank Zappa wrote a brutal death metal album?

Something that needs to be immediately addressed, given the rating that sits adjacent this write-up, is that this album is a musical masterpiece. Its precision and planning extend beyond the reaches of almost any death metal album ever recorded, justifying the aforementioned grandiose proclamation from this reviewer purely on the basis of merit derived from technical proficiency that places second to none among not only its predecessors, but its contemporaries -- most of whom fall on the side influenced by, rather than being an influence of, Defeated Sanity. The substantial jazz persuasion, particularly in regards to the odd time signatures, chaotic drumming, and creative wanderings, separates this from even the most progressively inclined extreme metal releases of the past decade, its overwhelming nature the primary character flaw. Considerably challenging for anyone to endure, The Sanguinary Impetus practically fends off listeners with its burdensome 35 minutes of meticulously crafted brutality, apathetic to criticism.

Which is good, because what follows will be more criticism than praise, despite the previous paragraph's initial hype.

Defeated Sanity have found comfort in pushing the envelope since their inception, exploring the edges of death metal's boundaries, but this latest push has taken them across a line: the line of what's enjoyable. It's a magnificent performance, likely to be used as a study guide for future generations of death metal bands, but therein lies the problem. As otherworldly and impressive as it is, it becomes something more suitable to show off to unsuspecting victims of this display of hypersonic discipline. It's like reading a thesaurus, filled with multi-syllabic and archaic words, but there's no story for said words to tell. Without a cohesive point-to-point structure, it becomes a chore to piece together for yourself, which limits the potential reach it has to capture various demographics. Instead, it narrows its search to those who have time and effort to wade through individual components of each track, dissecting every element along the way, exploring their favorite words and using them to write their own novel. And this is why a release of this magnitude, while theoretically deserving of a perfect score, falls shy of that mark. It covers all the bases and ticks all the boxes while executing them in a bold disregard for tradition and form.

Depending on your intent and perspective, this will either adorn the top of your various "best of" lists, or you'll give it one listen and never return to it again. It's almost impossible to imagine there being much room for an in-between section, though surely it exists. Independent of purpose, fans of guttural growls, seismic bass, subatomic distortion, and forward-thinking song structures will have plenty to feast upon, as The Sanguinary Impetus is rife with those qualities, but the inherent difficulty in retaining the information on hand could prove too demanding to attempt.