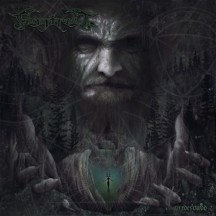 
Every folk metal band by now has either fallen off, had a lukewarm phase, or they were never that big in the first place. Finntroll endured.

The signs of folk metal's decline were quite apparent as far back as Finntroll's previous album, 2013's Blodsvept. Around that time Turisas completely fell off, Ensiferum released their worst received album, Eluveitie was threading on thinner ice before their implosion, and already people stopped taking Korpiklaani seriously. Sure, bands like Arkona and Moonsorrow and Cruachan went on as usual, but they were never as massive, hence why I'm generally more excited for some new material by the latter rather than the former. Except obviously the one massive folk metal band that never really had any of those problems. Sure, everybody can agree that everything after Nattfödd isn't as good as everything up to and including Nattfödd, but they never really properly fell off, hence why you won't find any of their albums with a rating under 8 here. And for good reason. And now Vredesvävd comes after a seven year silence to rival the ratings of their "classic" albums.

I don't want to waste the entire review talking about how much better and more consistent Finntroll are to other bands, but there's a reason why they're the exception to the rule. Firstly being one of the oldest bands in the game, being among the only bands I mentioned to have released an album in the 90s, they had the benefit of forging the sound before anyone else could, thus a lot of the folk metal records I do love owe their dues in some way to Finntroll. And while they were popular and "Trollhammaren" is a banger, they weren't really commercial in a way that a lot of their contemporaries were. They clearly had a black metal element that made their music feel like its own brand of vicious, but the Hummpa folk music made it so fun and endearing. The troll gimmick somehow worked perfectly with it. These creatures are jolly and like to dance and drink, but they will definitely slaughter trespassers and children who don't do their homework. The forest is dark and full of dangers to unwanted guests, but full of cheer and song otherwise. This isn't some "my ancestors going into battle and getting drunk beforehand" stuff.

And that has always been Finntroll's strength. Balancing the dark and the joyful in a way that makes sense. It's groovy, sometimes a bit jazzy, definitely epic, rather carnavalesque, quite mythical, and most importantly: mischievous. I mean, I really would've loved to hear the bland up the groovy jazzy tinges of Blodsvept, or play around with the formula a bit more, but from the experience that folk metal has went through in those seven years, I can't blame Finntroll for sticking with what works. And I also can't blame them for not putting out anything in the meantime. Now Vredesvävd feels less like another great folk metal album and closer to what we've all been waiting for, which also another great folk metal album, but in the context of not having had other great folk metal albums for quite a while. And those seven years sure as hell gave Finntroll some renewed vigor. They made Vredesvävd lean at less than 40 minutes, and in that time they certainly picked only the best melodies they've written in the meantime.

I can definitely see why this reminds people of Jakens Tid, since the fun, grooves and grimness seems to be calibrated closest to that album, and I feel a bit guilty of loving it so much despite not going in too many new territories, but it has the melodies, it has twist and turns and ebb and flow, it just sounds fantastic, in both senses of the word.

The cover art is quite disappointing, though.

Written on 24.09.2020 by
RaduP
Doesn't matter that much to me if you agree with me, as long as you checked the album out.
More reviews by RaduP ››