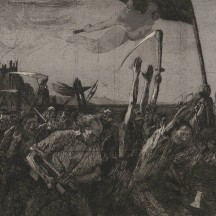 
While emphasis on atmosphere has played a significant role in the evolution of extreme metal's progression, so too has the balance between accessibility and exclusivity.

The relentless pursuit of growth and willingness to adapt to change on behalf of black metal musicians has led to some mesmerizing music over the years, culminating in the formation of bands that continue to push the envelope in terms of where the genre can thrive. Panzerfaust is one such band. Their unique approach, though developed under heavy influence -- whether intentional or not -- by the likes of Rosetta, Akercocke, Deathspell Omega, and Ulcerate, explores the various aspects of post-metal and death metal, incorporating a high degree of technical songwriting and crushing atmosphere. Further examination reveals a groovy, exhilarating depth hiding beneath the swirling riffs and bombastic drum work, adding layers of variation and engaging elements to not only keep you interested throughout its 45 minute duration, but also to entice you back for repeat listens. It's demanding and challenging when analyzed for its intricacies and subtle details, but forgiving and digestible from the outset for those who don't need to look beyond hypnotic melodies and gloomy ambiance.

Render Unto Eden is the second chapter of The Suns of Perdition, with its predecessor released just a year prior, but it follows and flows along the same format, with perhaps a slight improvement in regards to how surprisingly catchy it can be. The quick tempo and intensity of Alexander Kartashov's drumming is perfectly suited for the album's serious vibe, and his destructive cymbal crashes lend a nice touch to an otherwise predominantly bass-centric performance. Equally important, of course, are the riffs. The bulk of the guitar load focuses mainly on the creation of mood and tone, thereby mitigating the quantity, but the recurring structure of each song establishes a sound that is most accurately described as cataclysmic, absorbed more so as motif rather than repetition -- a fine line on which to play, but whose execution is flawlessly delivered. Fortifying this already monstrous cacophony is the immense and terrifying vocal performance of the aptly nicknamed Tom "Goliath" Remigio, providing a rich density with a hearty range befitting of the beastly Neurosis as much as the ghastly Taake. It also helps that the lines he delivers are exceptionally well written, courtesy of Brock "Kaizer" Van Dijk's poetic expression of religious themes relating to death, suffering, and the tribulations of life that man must endure, such as the impulse to commit acts of evil in direct defiance of God (the yetzer hara). It all blends together so seamlessly, like a waterfall of lava bleeding from the night sky, showering the cursed populace below.

Panzerfaust may be taking the scenic route on the path to becoming a household name in the scene, but their ongoing development is deserving of mass observation and admiration, as their consistent outpouring of quality content is something of a rarity. Bask in the flames of hate spewed forth by this portal to evil and succumb to its dark and tormenting influence. You won't regret it.