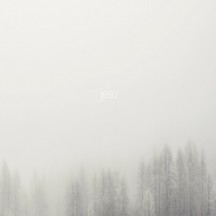 
It's been a while since we heard from Jesu.

Though the last Jesu album was 2013's Every Day I Get Closer To The Light From Which I Came, it's not like Jesu mastermind Justin Broadrick was taking too much of a break. He resurrected Godflesh, reshaped Zonal, and even Jesu became a collaborative outfit releasing two collaborations with Sun Kil Moon, which I have a feeling won't happen again. So even if things weren't really dormant, there wasn't really a proper Jesu album in seven years. Preceded by the July release of the Never EP, now comes Terminus.

I haven't given every Jesu release a relisten before this, but I feel like Terminus is the most mellow and bittersweet I remember Jesu being. Less properly metal but still fairly drone-like, this often moves to a more slowcore and shoegaze direction, with there being just enough of a wall of sound to remind us that this is still somewhat of a metal band. Or used to be, as there isn't one song on this that feels like it would get that genre classification or the greenlight to get it added to our website. Even if most of the electronics from the Never EP have been replaced by the droning guitars (there are still plenty of electronics in tracks like "Give Up"), it's great hearing the other side of the coin of guitar music.

It makes sense, since Justin also made a list of five eclectic songs and a Oasis one that served as inspiration for Terminus, ranging from britpop, post-punk, progressive rock, and dream pop that really feel close to the heart of this album (there was a version with 20 songs being selected, but for some reason that seems to have gotten removed). It's at the point in Justin's career where he is clearly both looking back and assessing where he currently is, hence why this feels like such a personal record and why there is very little outside contribution (Ted Parsons doing drums on a few tracks).

The album is much more simple and straightforward because of it, even more than just the lack of thick guitar, with a bit more of a freeform feeling as well. Because of that it relies quite heavily on the listener finding some emotional attachment and resonating with it instead of awing him with contrasts or layering. I can't say that for me it always hits, but it's more hit than miss. It just is what it is.

Written on 21.11.2020 by
RaduP
Doesn't matter that much to me if you agree with me, as long as you checked the album out.
More reviews by RaduP ››