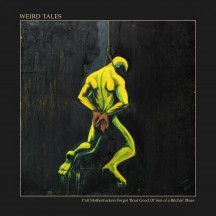 Heavy metal's relationship to the blues should be no news to anyone. Even since Black Sabbath's debut five decades ago, there had been blues in metal's DNA. But that was five decades ago. When thinking about blues and metal now, it's mostly some sappy love ballad from a hard rock band, and a guitar solo from someone who argues that too many notes means no feeling. In the grand scheme of things, metal's penchant for genre merges has been tried with electronica, jazz, pop more often, or at least it feels so, leaving the blues behind. Some may say that some who may be implied to engage in maternal incest have forgotten about this genre of music, which even though it is of quality and age, it is born from a female dog. But the blues is dark as hell, it is heartache and pain, sleeping in dirt and being spat on, being seen as a lesser being and abandoned by everyone, making deals with the devil for fame before the music industry even though of putting a pretty white face on rock n' roll to sell it to teenagers.

Another discussion is to be had about Polish stoner metal, a scene that has flourished in the past decade with names like Weedpecker, Sunnata, Spaceslug and Dopelord to name a few. Weird Tales joins this gang of purveyors of fuzzy riffs, with their sound bringing the fuzz into somewhat doomier territories. Sharing their band name with the magazine most famous for publishing most of H.P. Lovecraft's writings, they've decided to, as the band put it, create a Frankenstein's monster from the remains found in the blues' graveyard and summoned its spirits with blasphemous rituals. Not far off from what you'd hear in a Lovecraft's story, except that no one got mad, and there is some irony in covering black music considering how Lovecraft named his childhood cat, among other things that might not make him the most tolerant fellow.

With four songs from Lonnie Johnson, Skip James, Blind Willie Johnson and Muddy Waters, one from each. It's easy to tell from these songs and their lyrics that the blues itself was pretty dark, and that there is plenty more out there to be exhumed that is just as dark, like for example considering the theme it's surprising that no Robert Johnson songs were covered. Weird Tales take these songs and transpose them into something that is easier to associate with evil, darkness, and pain for a contemporary audience, bringing the distorted fuzz up to 11, with wretched riffs and doom. Listening to the originals, it certainly feels like they come from another time where musical language and recording technology just feels far removed from what we are used to today. But as much as Weird Tales' takes on these classics are fantastic in their translation, the emotional weight is lost in translation. There is a reason why there is a Blind Willie Johnson song floating through space right now, it is because humanity deemed it the best way to express sorrow in song to someone completely lacking our musical language, a difference far larger than the century since. You just can't replace that with fuzz. But fuzz is great. Especially since it proves really useful in adapting other genres.

But even if some of the emotion is lost, it's good to be reminded of good ol' son' of a bitchin' blues. Some forgot. Some didn't.