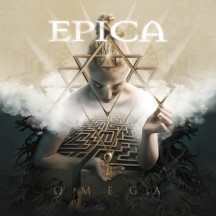 
Epica really need no introduction, as far as anyone with a passing interest in symphonic metal is concerned; only Nightwish and Within Temptation really surpass them in terms of international renown. However, whilst those two bands are currently going down increasingly divisive musical paths, fans can rest assured that the same is not the case with Epica on Omega.

Arguably peaking in the mid/late-2000s with The Divine Conspiracy and Design Your Universe, the Dutch collective have nevertheless remained consistent in their approach since then, without ever having a truly concerning dip in quality (even if Requiem For The Indifferent may have unintentionally left some listeners indifferent, based on its rating here). The combination of a chuggy metal base, operatic/growling vocal contrast between Simone Simons and Mark Jansen, extravagant symphonic bombast courtesy of grandiose choral and orchestral arrangements, and cues from World music influences, particularly Arabic music, has remained in place throughout their recent records, albeit with minor deviations or experiments with other stylistic elements. The musical description in the last sentence pretty comprehensively summarizes the contents of Omega as well; whilst I can't speak for the hardcore fans, I don't think there's much to be found here in terms of musical content that's likely to surprise most listeners. Now that it's clear that the style of the music is going to deliver what is expected, the only question that remains is whether the quality of the music will match expectations.

I've seen a few comments in the album thread of Omega criticizing it for lacking in memorability and placing style over substance; to be honest, that's been a consistent issue with Epica throughout my experiences with listening to them, and is why I've never taken to them as strongly as I have Nightwish. However, whilst I would agree that the songs here aren't as consistently gripping as those on their best albums, particularly Design Your Universe, I don't think the gap between them is huge. Probably the bigger issue that Omega has is the distribution of the standout tracks, as I find it to be quite a front-heavy record. "Abyss Of Time" is the first full song on the album, and it may well be the best one here; leaning heavily into power metal, this fast-paced juggernaut draws listeners in instantly with its exciting and memorable chorus and other vocal hooks. This chorus is the first chance of many for Simone Simons to shine; whilst I felt like Nightwish's most recent album didn't play to her compatriot Floor Jansen's strengths, Simons sounds completely in her element throughout Omega, standing out even against the impressive performances from both the metal band and the symphonic components and consistently being the best thing about the album.

"Abyss Of Time" is a tough act to follow, and one that "The Skeleton Key", probably one of the weaker songs on the album, fails to live up to, but the subsequent trio of songs I find to be quite memorable, particularly due to the choral arrangements and Arabian-influenced melodies. I wouldn't say I love the songs, but they generally deliver what you'd hope from an Epica song, particularly the grandiose chorus of "Code Of Life". However, in keeping with past Epica records, Omega is another lengthy effort, and it's a case of diminishing returns after "Code Of Life" is over with. "Freedom" is a tad pedestrian, whilst "Rivers" doesn't recapitulate the soft song magic of something like "Tides Of Time", meaning that it starts to drag before it's over. The remaining few tracks are all solid enough, featuring enough strong moments to make the closing stretch of Omega a satisfying one, even if none of them reach true greatness.

However, this summary does overlook one track that deserves a few words of its own. As hinted at before, I'm not an ardent follower of Epica, but I'm aware of their cross-album sagas, and I'm also familiar with the excellent "Kingdom Of Heaven" from Design Your Universe. Omega brings both of these into play with "Kingdom Of Heaven, Part 3 - The Antediluvian Universe", a 13-minute epic right in the center of the album. Those more committed to the "Kingdom Of Heaven" legacy may have their quibbles with it, but I felt like this track was the only real competition "Abyss Of Time" has as far as highlights on Omega are concerned; the symphonic-heavy moments are epic, the extreme metal portions hit hard (going into full-on tremolo and blast beats at times), and the keyboards during the last couple of minutes threaten to steal the show. It's not the best epic that Epica have written, but it's a solid addition to their collection.

Overall, Omega sees Epica sticking to what they know and delivering an effective album as a result. It may not be the band at their best, and perhaps some Epica fans might wish the band would mix things up a bit more like their peers have done recently on albums such as Human. :II: Nature. or Resist, but at the very least it should be far less divisive than those albums, and I would expect most fans to find it to be another enjoyable entry in their impressively consistent discography.

Written on 06.03.2021 by
musclassia
Hey chief let's talk why not
More reviews by musclassia ››