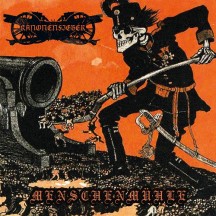 
Kanonenfieber's Menschenmühle was recommended to me by the German minesweeper of Metal Storm. Only the mines he is sweeping are fantastic albums of the underground that he brings to the attention of quality extreme metal-hungry metalheads like those of you reading this review.

World War I, or The Great War, is a very interesting subject matter for metal and black metal in particular, being a welcome variation to all the satan-loving, human-hating, cosmic-tripping, or tree-hugging obsession of the style. The cover art of Menschenmühle (human grinder) is a great illustration of how humans were used as cannon fodder during those dark times for humankind and even reminds me a little of Pink Floyd's mincer.

Minenwerfer are the most immediate comparison that comes to mind when listening to Kanonenfieber, whose name doesn't actually mean cannon fodder as I would have thought but cannon fever (every day I learn something new when reviewing for Metal Storm). This comparison refers both to the lyrical aspect as well as the musical one. Just like Minenwerfer, these Germans have a knack for melody in their black metal and they also use some acoustic / post-rock parts. These parts work as breathers to counterbalance the pummelling aggression, which is the main chunk of the music. The aforementioned melody is by no means of the cheesy kind, but more of the swirling one you expect from bands like Mgła or Panzerfaust.

The vocals are slightly leaning on the death growl-type and this is one of the reasons why Menschenmühle sometimes sounds like a death metal album, even though it is not. There are also a few groovy death metal riffs and passages and also some doom death metal ones that add to the diversity of the listening experience. In fact, one of the biggest successes of this album is how varied it is, with each song offering something different and with changes in mood and tempo often occurring within the songs.

I put the lyrics through google translate and they are really worth reading. German-speaking metalheads should appreciate this album more because from what I could make out, it is not just the theme of WWI that is so captivating here, but also the way that these lyrics convey the grimness, the pain, the hopelessness, and the inhumanity of war. The lyrical background is based on factual reports, letters and other documents from the surviving and deceased soldiers. The language fits the music very well because German sounds quite aggressive (at least to my ears). Another important aspect is the use of samples and speeches that evoke a sense of actually being part of that era and of the warfare which took place.

Menschenmühle bears the smoking smell of gunpowder and the rotten stench of pits packed with muddy corpses. It is a very promising black metal debut that will satisfy both the extreme metal lover and the history buff in you, and leaves a lot to hope for the future of Kanonenfieber.