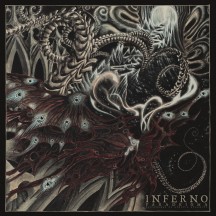 
01. Decaying Virtualities Yearn For Asymptopia
02. The Wailing Horizon
03. Descent Into Hell Of The Future
04. Phosphenes
05. Ekstasis Of The Continuum
06. Stars Within And Stars Without Projected Into The Matrix Of Time

Well, granted, Inferno is not the first nor the only metal band to be called Inferno, and, as it turns out, there are 18 bands with the same name on Metal-Archives, two of which are actually 80s thrash metal bands. It's just that Inferno is the most relevant of the bunch. Not only because they were formed all the way back in 1996, but because they managed to maintain an interest in their newer releases. And when I say "maintain an interest in their newer releases", I mean people mostly care about those new releases since 2013's Omniabsence Filled By His Greatness. Which might explain why their sound is so fresh. The vocalist is the only member that has been in the band previous to 2008, and the guitar duo has been a constant presence of these three last releases which have raised Inferno's caliber.

I'll have to admit that I didn't get to check out their early material, and I probably will at some point, but it doesn't look as interesting in comparison. The Inferno of the past decade seems like a completely different band, one that understands how the black metal of today operates and doesn't linger in the same old Eastern European pagan/anti-Christian sphere. Instead, it knows that black metal pushed boundaries. And it helps push them too. Using Deathspell Omega as a comparison isn't too out of place, but it would be reductive to only mention them, when it feels like Inferno share a lot with the likes of Acherontas, Akhlys or Ascension or their countrymen in Cult Of Fire for something closer and also not starting with "A". This is swirling and hypnotic black metal with a huge emphasis on that dissonant psychedelic and esoteric atmosphere, but one that still tries to keep at least a bit of the riff alive.

And that is where Inferno have been until now. At this point, Paradeigma pushes even deeper. Feeling like black metal that was drowned in nightmares, the ambiance pushed to 11, the vocals even more eerie, the riffs even more formless, the sounds lost in a maze of terror. This is black metal done with the logic of dreams, where one can still pick out some riffs and notice the first and second and third wave influences accordingly, but akin to picking up a familiar face in a dream and wondering how they made sense in that context once you wake up. It's a tough balance between being too atmospheric for your own good and maintaining a good sense of it, and Paradeigma mostly succeeds at sustaining the dreamlike feel without hesitating to reveal some interesting musical elements outside of said dreamlike sense. You can feel some post-punk, some melodic moments that would border on symphonic black metal in another lifetime, and the drumming is the one element that feels most tangible, yet even it is out of reach. Still not as far removed as the cavernous vocals, which are so unintelligible and obscured that they simply form another veil in the dream.

A lot of black metal bands move away from black metal either to dark ambient or dungeon synth or whatever, but most of them do it by abandoning black metal and taking preconceived genre norms of said genres. Inferno twist black metal into it, making it almost unrecognizable. There is no excuse for a band not to be this innovative this late in their career, not only in terms of their own sound, but in terms of the genre as a whole. This is exactly what Inferno did here.

Written on 09.06.2021 by
RaduP
Doesn't matter that much to me if you agree with me, as long as you checked the album out.
More reviews by RaduP ››