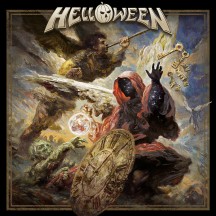 
No pressure Helloween, it's not like this will be the most anticipated power metal album released this decade or anything.

I've talked before about my scepticism over bands releasing late-career self-titled albums, but in the case of Helloween, I understand completely the rationale behind this decision. Featuring Kai Hansen and Michael Kiske alongside Andi Deris, Helloween sees the band's entire history of lead vocalists all represented together. This album is the first time fans will have heard Hansen and Kiske singing on a Helloween record in 35 and 28 years, respectively, and naturally there's a lot of excitement that comes with this, not only due to the simple fact that it's been so long since these musical spheres collided, but also because it raises the possibility of the band returning to the sound they had when those members were originally in the band, something that the presence of the iconic keeper of the seven keys on the beautiful album artwork only hints further at. Living up to all this expectation was going to be a Herculean task for Helloween, one that it doesn't fully accomplish, but is Helloween at least a successful return to the power metal behemoth for Hansen and Kiske?

Probably the first thing to address is whether Helloween does see the band edging closer to their 80s roots or continuing in the vein of their recent albums with Deris, and I would say that the answer is yes; to be honest, from a purely musical perspective (I can't even pretend to care about any overarching conceptual background there may be to Helloween's music), this sounds like it would have suited the title of The Keeper Of The Seven Keys: The Legacy more than the album that was actually named that. "Out For The Glory", right out of the gate, feels like a real throwback to the classic Keeper records, partly due to the presence of Kiske on vocals, but also just the instrumentation all round. It's an exciting kick of nostalgia that makes you immediately glad for the return of Kiske to Helloween, who I have to say has barely aged a day vocally; without knowing the recent history of the band, I could've easily been sold if someone tried to convince me that this was a recently unearthed lost song from the 80s recording sessions. "Out For The Glory" is definitely the song that sounds most connected to the original Kiske period of Helloween, but "Best Time" isn't far off, sounding like a natural successor to previous mid-paced anthems such as "Future World" and "I Want Out".

I enjoy the Kiske-led songs on Helloween, but how about the Deris-centric songs? "Fear Of The Fallen", which sees Deris and Kiske nicely duetting with each other, is a good effort that feels like a bridge between classic and modern Helloween. I wish I could be so positive about "Mass Pollution"; I've got no idea why Helloween decided to try and write a Mötley Crüe song (or maybe Accept is a fairer comparison), but I could happily never listen to this track again. "Mass Pollution", whilst very much the low point of Helloween, signals a transition into the 'album track' period of record; of the few songs that follow, "Rise Without Chains" is perhaps the most notable, with plenty of energy, a solid chorus and exciting guitar solo work. Considering the album's length, a couple of tracks from this stretch could easily have been cut, with "Mass Pollution", "Indestructible" and "Cyanide" probably being my picks for the chopping block.

"Out For The Glory" is the second-longest song here, but after a stretch of shorter tracks, Helloween toss a couple of similarly long songs into the mix near the end with "Robot King" and "Down In The Dumps", neither of which rival it in quality, but they manage to remain engaging despite their lengths. If the album finished with "Down In The Dumps", Helloween would be a respectable return from Helloween, and one of their stronger albums of the Deris era. However, instead of ending there, Helloween is rounded off by the only song longer than "Out For The Glory": "Skyfall".

The sole writing contribution of Kai Hansen, this song is another reason why Helloween follows the legacy of the Keeper records from the 80s, namely in that it features a brilliant epic of over 10 minutes as the album's climax. I don't think it's a bold claim to already say that "Skyfall" is going to be the best power metal song released in 2021; it's heads and shoulders above not only most of the material on this album, but most of the material Helloween have released since Kiske and Hansen first left the band. Masterfully judged in its progression throughout, the song sees all three vocalists and the whole band shining brightly, channelling the almost unparalleled greatness the band possessed in their peak once more, from the main chorus to its rousing climax. "Skyfall" single-handedly elevates Helloween from a nice return to the band for Kiske and Hansen to a genuine late-career highlight, and one that leaves me hoping that the three-vocalist version of Helloween continues for a while longer.

Written on 16.06.2021 by
musclassia
Hey chief let's talk why not
More reviews by musclassia ››