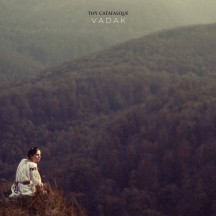 
Naiv set a tough standard for the next Thy Catafalque album to live up to, but coming less than 18 months later, Vadak makes a mockery of that challenge.

Naiv claimed the title of Best Avantgarde/Experimental Metal Album in our most recent Metal Storm Awards in spite of strong opposition, and it's hard to argue much against the victory, with the album successfully prioritizing the more fun side of Thy Catafalque to produce a joyfully eclectic effort. Thy Catafalque are described as an avant-garde metal band, partially due to the project's eclecticism within songs, but also due to the range of approaches displayed between songs and albums, which varies from playful folk to crunching extremity. Different albums prioritize different areas within that sonic range (for example, Meta pushed the extremity further than the other albums released by Thy Catafalque in the 2010s), and it's no different here, as the lighter nature of Naiv is toned down in favour of a more intense and slightly more melancholic approach on Vadak. However, the shift in focus doesn't result in any notable decline in quality.

"Szarvas" displays some of that intensity early on, as well as some of that eclecticism; there's blasting and screams, but also oscillating electronics, multiple memorable riffs/guitar melodies, deep clean vocals and a nice guitar solo to cap everything off. "Köszöntsd A Hajnalt" highlights that between-song variety by moving straight into a slow, sad folk piece carried by redpipes (electronic bagpipes, according to Google) and female clean vocals. One of my favourite songs on the album, "Köszöntsd A Hajnalt" is a fine example of how well project mastermind Tamás Kátai writes folk-heavy metal; "Kiscsikó (Irénke Dala)" is also folky, but in an entirely different way, with a folky central guitar melody driven along by persistent drums and a delicate acoustic mid-section eventually culminating in a vibrant finale accentuated by triumphant trumpets.

As far as other styles on the album are concerned, Thy Catafalque explores smooth jazz on "A Kupolaváros Titka" courtesy of slick drumming, smooth piano and a saxophone solo backed by muted sound effects of emergency vehicle sirens in a big city. At the other end of the spectrum, "Gömböc" and "Az Energiamegmaradás Törvénye" feature some potent intense metal, with powering percussion and juggernaut riffs. However, it's not all doom and gloom on these songs, whether it's the energetic rush of the keyboard-heavy mid-section of "Gömböc" or the mellow outro of "Az Energiamegmaradás Törvénye".

I've mentioned keyboards/electronics a couple of times, and they do play a major role on Vadak, perhaps never more so than in the synthwave-esque closing stages of "Móló", one of two songs on the album to exceed 10 minutes. "Móló" is perhaps slightly more single-minded than "Vadak (Az Átváltozás Rítusai)", the other track, as prior to that synthwave period the song mostly focuses on fast, convoluted prog-death, albeit with some ear-catching keyboard solos interwoven. "Vadak (Az Átváltozás Rítusai)" also opens up quite brutally, but this is very much a song of three movements, with that extreme prog opening followed by an extended sequence of string music accompanied by Martina Veronika Horváth's excellent vocalists (plus a nice little saxophone section), an enchanting bridge between the song's intense opening and epic, grandiose outro.

As can be ascertained from the above, there's a lot of different sounds to be found on Vadak. However, it's all reliably delivered to an excellent level. Naiv was the most that I'd enjoyed a Thy Catafalque record in nearly a decade, but Vadak is arguably even better; certainly, there's more moments here that truly excite me, whether it's the melancholy of "Köszöntsd A Hajnalt", the racy middle part of "Gömböc", the emphatic outro of "Vadak (Az Átváltozás Rítusai)" or a dozen more songs or sequences. Additionally, the album is rounded out wonderfully by the piano piece "Zúzmara", offering Horváth's vocals one last chance to enchant listeners. Vadak is just a quality record, pure and simple, and Tamás Kátai is well and truly on a roll.

Written on 30.06.2021 by
musclassia
Hey chief let's talk why not
More reviews by musclassia ››